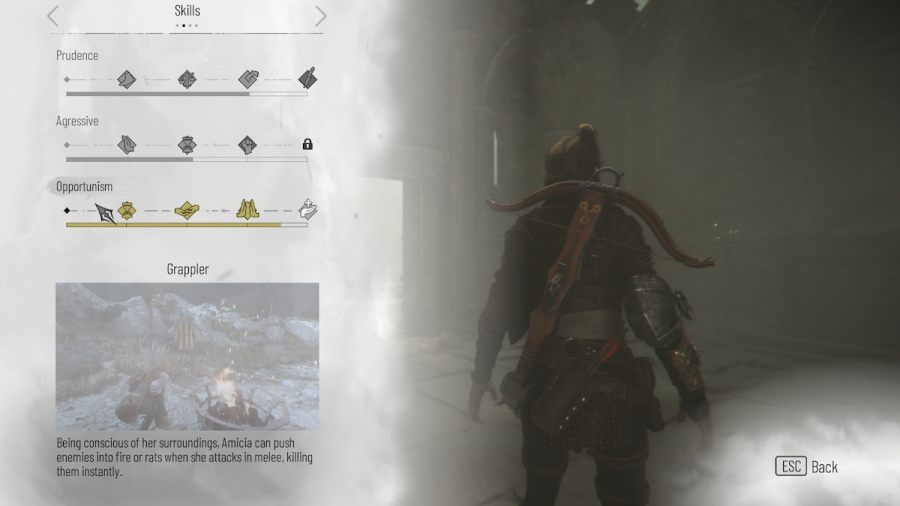 How to increase the skill trees in A Plague Tale Requiem

To unlock skills in Plague Tale: Requiem entirely depends on your chosen playstyle. The three skill trees available are Prudence (Stealth), Aggressive, and Opportunism (Alchemy). Each skill gauge is progression based and will increase depending on your choices as you play. Do you stealth, or do you kill?

Basically, it boils down to this. The more you stealth around not killing enemies, the more Prudence will increase, and the more killing you do will, Aggressive will increase so on and so forth. It ultimately decides how you play. On our playthrough, we felt like we killed many enemies, yet our Aggressive skill tree was the lowest out of the three. But we attempted to stealth through most of it, and everyone died when it failed.

Related: Can you fully upgrade all skills & equipment in one playthrough in Plague Tale Requiem?

Opportunism will undoubtedly always be among the highest trees regardless of your playthrough. Alchemy is far too important to ignore. Not only do you need to get past the hordes of rats, but it is only of the only ways to kill certain armored enemies easier. There are not enough knives and crossbow bolts to kill everyone without the help of alchemy.

What is the best skill tree to increase in A Plague Tale Requiem?

The Prudence skill tree is the best tree to increase in Plague Tale Requiem. It's better than the Aggressive skill tree. Being able to move faster crouched, be more silent, throw things further, and kill fully armored soldiers with a single knife is extremely hard to beat.

The Aggressive skill tree needs Prudence to benefit from its full utility. Being able to push enemies into fire/rats and strangle enemies faster is helpful but requires stealth. The only benefit the knocking two rocks in a single sling is for story beats when you are vastly outnumbered.

Opportunism is a given and isn't included in this because it will always progress.

How to unlock new skills in A Plague Tale Requiem