If you're wondering what Archero's Best Abilities & Skills are then you've come to the right place! Abilities are very important in this game, and they largely make or break each run you are on. We'll give you a good idea for which abilities you should be choosing for each level you hit!

Some of these abilities are best when paired with others. An ability like Bouncy Walls is only good if you have one of the skills that allows for your shots to be split, or if you have gotten the Piercing ability. Now, that doesn't mean you shouldn't still grab it if it appears. You'll likely get an ability that should pair with it, just know that it won't always be useful right away.

This is one of the best abilities in the early game when you aren't needing to be fully buffed for bosses. Your shots once they hit a target will then hit other monsters in the area. This can get really insane if you get some buffs to your front arrows, or are spreading more shots around with diagonal or side arrows. Basically, this is one of the best skills for tearing up bigger packs of monsters. You'll want to prioritize it less if you've gotten pretty far in the game, because bosses become the more worrisome foe, and it's not as good against them.

This can lead to some big damage, and if you can stack these up with things like Ricochet or Attack Speed & Crit then you can really start destroying enemies. The great thing about this one is that it's good against bosses and just general mobs. While it's not technically an AOE, it can still hit multiple enemies and deal more damage to the one you are firing upon. This also pretty much guarantees that you'll hit enemies if they are moving. 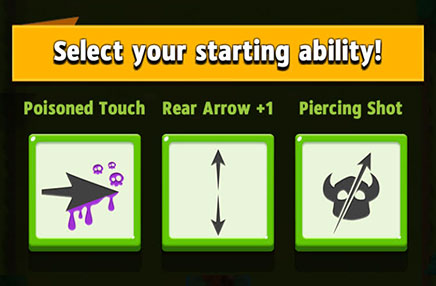 This one is better for single targets like bosses in particular. You will fire more than one shot at a time with this, so having it with Front Arrow is extremely powerful. This also obviously pairs well with Ricochet because you'll be adding extra shots every time you hit a monster.

This will spread out your shots a bit, so you can do some damage to other enemies. This one pairs really well with Bouncy Wall, which will bounce the arrows off the walls and gives you a good chance of hitting enemies with the extra shots so that you don't have to aim them.

This one pairs incredibly well with Diagonal & Side Arrows. It's also really good with Piercing, because you'll hit a monster and the arrow will bounce off the wall and potentially hit another one! Strong ability that works well with any of the spread or increased shot abilities.

These are all very good abilities, and should generally be taken whenever you see them. Attack Speed in particular can get pretty crazy, because you can really start launching a ton of shots if you get the option a couple of times. These are great all-around choices, and will rarely ever be the wrong option in your build.

It should be noted that Attack Speed gets weaker if you are playing in chapters that require you to be moving after every shot!

This is a good skill, but it's best when paired with Bouncy Walls so you can really start having shots go all over the place and hitting just about everything in the room. Add some of the other skills that spread out your shots, and then you've really got a strong ability.

They are along the same level, but Fire does a lot more initial damage and can kill lower health enemies almost immediately. Poison on the other hand is better against higher health monsters. This is because once they are poisoned, they stay poisoned. So, they will eventually succumb to the poison at some point, but you will usually be there to help them along the way to their doom.

Once you get a pet equipped, then Wingman becomes one of the better skills you can have. This allows you to stand behind your pets, and they will absorb any oncoming projectiles looking to deal you damage! It's a great layer of extra protection as you get later into the game.

Archero Gems, Coins, Energy Guide – How-to Farm, What to Spend Them On?