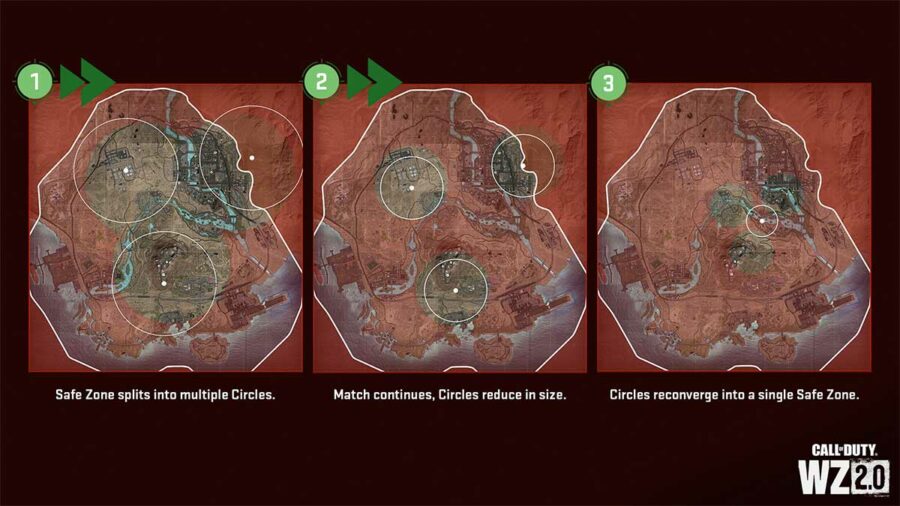 Circle collapse, or safe zone, is one of the key elements of any Battle Royale game, including Call of Duty: Warzone. For Warzone 2, the developers have reworked how this mechanic works in addition to changing how looting, vehicles, and core gameplay play out. Let's have a look at how the new safe zone structure works in Warzone 2.

You can easily interpret from the images above how the new circle collapse will work. In the first phase, the first circle positioning is marked on the map as you bail out of the aircraft and try to make it to your preferred landing spot. The second circle collapse phase is when you get to see real change from the traditional Battle Royale formula.

Instead of further closing into a smaller circle, the safe zone is split into multiple small zones that are separated from each other. The split may result in anywhere from two to four safe zones to play in. Thereafter, these individual circles keep shrinking until they finally converge into a single safe zone while the match nears its end as shown in the fourth image.

Evidently, this change is pretty drastic and you will have to get used to it. This will change how players approach positioning and relocation in Warzone. This may also create instances in which all the teams are concentrated in two circles while the third one is left empty or with a single squad only. Regardless, Warzone 2 is a new game and it's good to see changes. We'll just have to wait and see how things turn out.

How does the Circle Collapse work in Warzone 2?