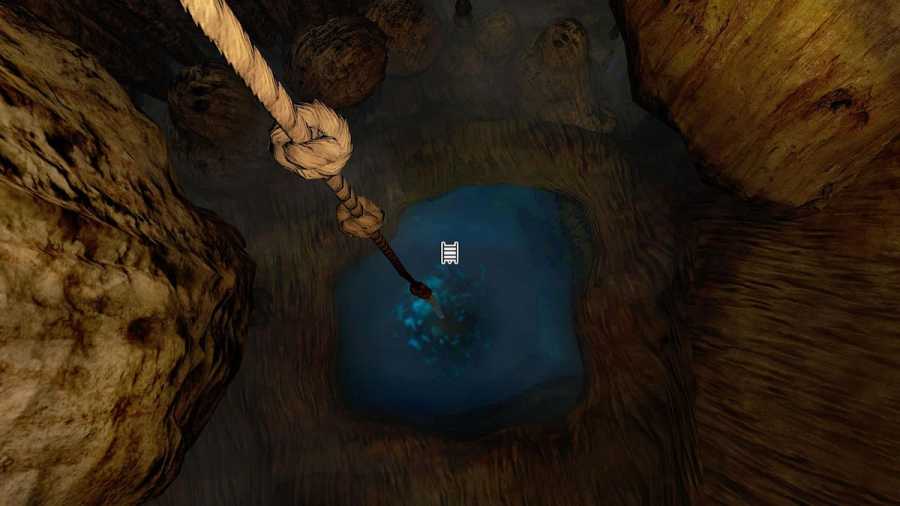 Colossal Cave Adventure may have been the first text-based adventure game, but Roberta Williams refused to let this title fade into history. Utilizing modern software, Cygnus Entertainment created Colossal Cave, a 3D reimagining of the classic text game. Through spoken narration and a genuine love for the medium, Roberta Williams developed a game that does the original justice, though it encounters a few bumps along the way.

The mechanics of Colossal Cave are relatively easy to understand. You can look at objects by left-clicking and switch to interacting with them by right-clicking. The inventory features are also easy to pick up, and the game's controls are fittingly mapped onto the keyboard. This game beautifully meshes the traditional point-and-click feel with a 3D environment and isn't distracting.

However, while it's easy to interact with objects, it is terribly difficult to determine what to do with them. Object-based puzzles require odd leaps of logic, a classic puzzle game pitfall I hoped Colossal Cave wouldn't fall into. In one of the first puzzles, you must drop a wand out of your inventory before walking up to a bird. To know what to do, you must infer that the rod scares the bird, which doesn't make much sense. The inventory is an active mechanic in this game, which isn't explained, despite its importance.

After acquainting myself with the game's weird logic and applying it to the other puzzles, I did have more fun while playing. Even so, the period between confusion and comprehension was long and frustrating. I constantly felt like a beginner struggling to learn the basics, which wasn't a pleasant experience.

The voice acting is excellent and brings me back to the old days. The narrator's voice is crisp, clear, and comedically sassy. Perhaps this isn't an intentional detail, but his tone while saying, "you can't fit through a two-inch hole" and "that is useless right now" is just condescending enough to be hilarious. It reminded me of The Stanley Parable, how the narrator has a life and personality of his own. The narration is also helpful for determining where you are in the cave since he describes the room you're currently standing in.

Related: What is Stanley Parable about? Gameplay, editions, & where to play

The graphics are not groundbreaking, but their simplicity is charming. Some tunnels obviously reused the same assets, which is fine, but it was a bit distracting. The only place the graphics fell flat was with the humanoid characters. The dwarves move stiffly and mechanically, which is unfortunate, considering they appear quite often. However, the items and environments look lovely, especially the areas with natural cave structures. The UI is also quite nostalgic, with the classic eye and hand interaction icons.

It is strange just how difficult this game is. For being advertised as a family adventure game, Colossal Cave has several frustrating moments, particularly in the area Witt's End. In this section, you must choose from one of 10 exit paths, and the answer is randomly generated and rapidly changing. This puzzle could have required players to carefully scan their map to find the exit, but instead, the developers opted for an oddly exhausting solution.

While you're adventuring in Colossal Cave, there are dwarves who randomly appear and throw knives at you. Although they typically miss, they occasionally hit their mark and kill you. This forces you to either risk losing a ton of progress or compulsively save to avoid backtracking. This mechanic is such an obscure approach to difficulty, and though it's not awful, it dampens my enjoyment of the game.

The one source of difficulty I did enjoy was navigation. If you try to explore Colossal Cave without using your map or compass, you will quickly become hopelessly lost. The game encourages you to utilize the compass to find your way through its many layers and rooms. I don't remember the last time I actively relied on a compass in a game, so this was a nice way to make the most of the game's features.

Related: How do you escape Witt’s End in Colossal Cave?

Once I figured out how to interface with Colossal Cave and its strange logic, I genuinely did have fun. As someone who hasn't played the original game, this was a fascinating way to experience gaming history. While playing, I found myself looking up walkthroughs from the original text game when I was stuck. The hints for a 1976 game helped me solve puzzles in a 2023 game, which is phenomenal if you think about it. Although Colossal Cave has a few mechanical shortcomings, it is fun, and it's evident the creator put her whole heart into this project.

We received this code from Cygnus Entertainment for reviewing purposes.

Colossal Cave Review: I feel like a beginner again