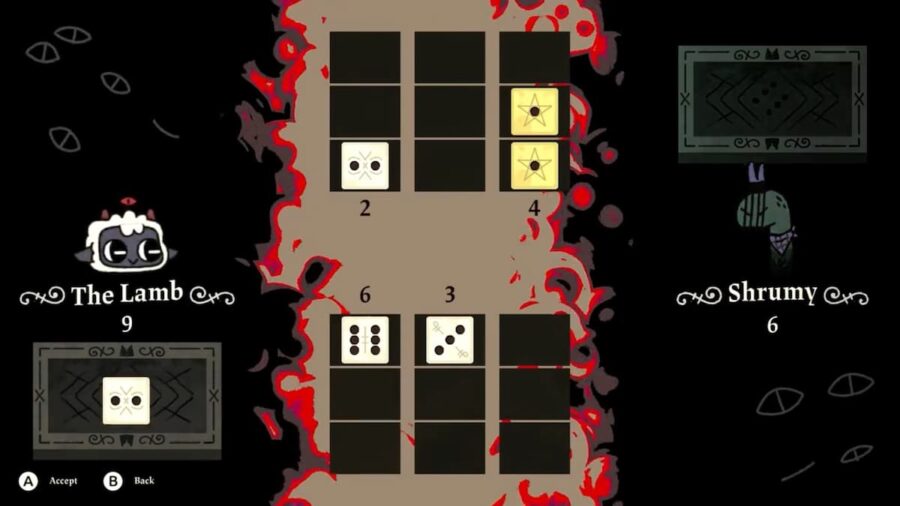 After previously revealing a fishing minigame, Cult of the Lamb also revealed another minigame called Knucklebones. This is a dice-based game that you can play during downtime and enjoy the beautiful cult life.

This news comes via the official Cult of the Lamb Twitter, which states, in part, "Shrumy is betting on our 666th tweet with a round of Knucklebones, a dice game of risk and reward!" The Tweet Chain then goes on to explain the rules of Knucklebones, how to play, and some of the challenges you may encounter.

Related: Is Inscryption coming to PS4, PS5, Xbox, and Switch?

The game is played by rolling dice and placing them on a board with three rows—each player has their own board. Your goal is to score the most points by placing dice in advantageous locations while also destroying your opponent's dice.

Knucklebones looks to be a nice relaxing minigame to enjoy when the stress of cult life gets to you. Keep an eye out for other players and challenge them to earn some coins. The more you win, the more coins you have to spend upgrading your cult and its camp.

For more information on gaming, check out Return to Monkey Island developer shuts down blog comments, refuses to talk about the game after abuse and What is Anger Foot – Release date, platforms, & more on Pro Game Guides.

Cult of the Lamb reveals and explains Knucklebones, an in-game minigame