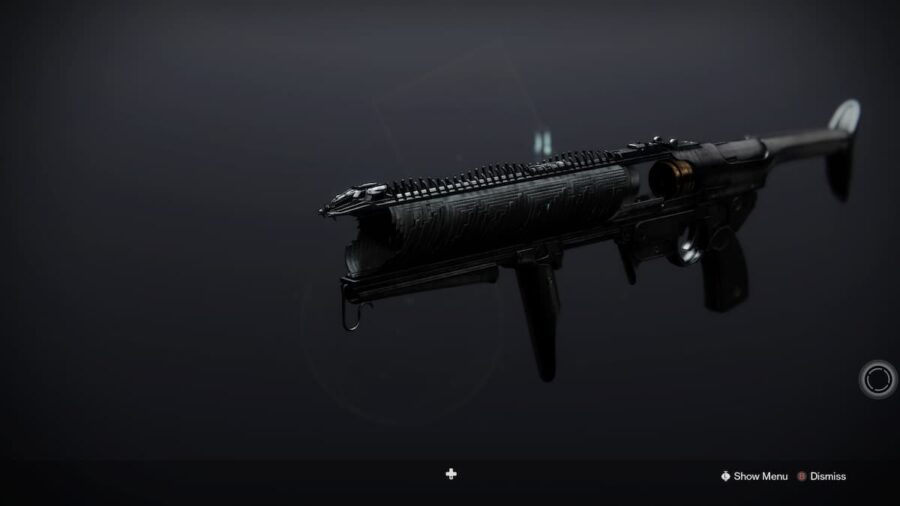 Another equally important part of any Guardian's arsenal should be a healthy collection of grenade launchers. These heavy-hitting, powerful weapons provide the necessary speed and damage output to take on large groups of rank-and-file enemies or put a tough boss in the dirt.

The Salvager's Salvo is a breech-loading, energy grenade launcher that has quickly become one of the most popular grenade launchers in the game. Its popularity is due in part to this weapon's excellent combination of perks and its availability to all players, both low and high level.

With the option of two weapon perks in both columns, the Salvager's Salvo stands in a league of its own. The first column has Ambitious Assassin and Demolitionist, while the second column has Chain Reaction and Vorpal Weapon. Only one perk can be selected at a time in each column, but the combinations are powerful. For example, using Ambitious Assassin and Chain Reaction together is deadly. By shooting one enemy in a group with the weapon, a chain reaction explosion occurs, killing all the other enemies in the group. So, when you reload again, you will have two shots in the magazine rather than one, thanks to Ambitious Assassin.

Anyone can still obtain this weapon as well. Check with Banshee-44 in the Tower, as he might be offering the quest for it. If not, the quest can be found at the Quest kiosk next to the Postmaster.

This is a Heavy, Power grenade launcher that is the most recent grenade launcher added to Destiny 2. What makes this weapon so great (and worthy of this list), is its possibility to drop with the new perks. These perks include Adagio and Ensemble. Adagio is a damage-buffing perk, which is always useful, and Ensemble increases handling and reload speed when you are near allies. This perk works constantly in Crucible matches. Besides new perks, this weapon can also drop with Impulse Amplifier, Clown Cartridge, Chain Reaction, or Vorpal Weapon. All of which are very useful.

This weapon can be obtained from focusing Umbral Engrams or through the loot chests in Astral Alignment.

This may be a bit odd to have two grenade launchers in one spot on this list, but these two weapons are practically one-and-the-same and more importantly represent a small collection of breech-loading grenade launchers that roll with Blinding Grenades. Rather than doing sufficient damage, these weapons, when shot at an enemy, will disorient and briefly blind them.

These weapons are pretty underrated and are particularly effective in PvP activities since you can use them to blind other Guardians.

Most of the weapons are obtained through world drops which means you can get it as a random reward doing just about any activity in the game.

Anarchy is an exotic, power grenade launcher that boasts high damage output with a unique exotic perk. This perk is called Arc Traps. Instead of shooting an enemy directly, you can shoot the ground around them, creating a web of electricity that does continuous damage for a prolonged period of time.

Despite its irrelevance to the meta as it was in Season 14, Anarchy is still a great weapon to pick up and still does a ton of damage. As long as you have the required materials to buy it, this weapon is obtainable through the Monument to Lost Lights kiosk in the Tower. Look under the Forsaken Exotics tab for the weapon.

This is an exotic, breech-loading grenade launcher that continues to see a ton of use in both PvE and PvP activities. It is the only grenade launcher, besides Anarchy, that does continuous damage in one area. Its exotic perk, Primeval's Torment, creates a Taken blight (pool of damage) wherever the weapon's projectile lands. It will continue to do damage for quite a while before it disappears. This weapon is an absolute menace, and in PvP, if you get stuck in the blight, you're dead in a matter of seconds.

As long as you have the necessary materials to buy it, this weapon is obtainable through the Monument to Lost Lights. Look under the Shadowkeep Exotic tab for the weapon.

For more Destiny 2 content, check out How to Get Dino Armor Ornaments in Destiny 2 on Pro Game Guides!