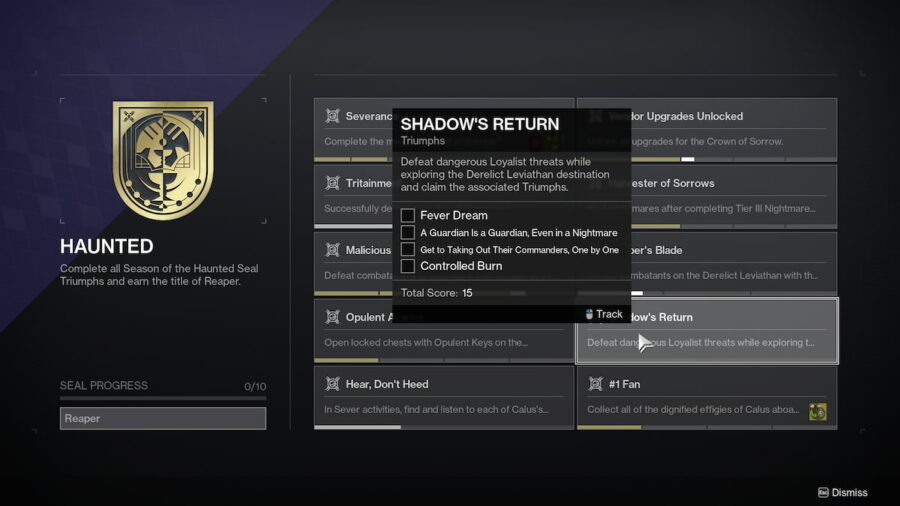 Destiny 2 has a new title to be claimed. But in order to do so, Guardians are going to need to jump through some hoops. The Shadow's Return Triumph tasks Guardians with completing four other Triumphs that each have multiple steps. These all involve slaying some target aboard the Derelict Leviathan. Let's get to hunting.

To obtain this Triumph, Bungie offers the following advice to Guardians: "Defeat dangerous Loyalist threats while exploring the Derelict Leviathan destination and claim the associated Triumphs."

Defeat each of the powerful Nightmares within Haunted Alcoves on the Derelict Leviathan and claim the associated Triumphs.

A Guardian is a Guardian, Even in a Nightmare

Get to Taking Out Their Commanders, One by One

On the Derelict Leviathan, defeat each of the roaming Nightmare targets within the Royal Pools.

On the Derelict Leviathan, defeat each of the roaming Nightmare targets within the Pleasure Gardens.

For more Destiny 2 goodies, check out How to get the Terminal Velocity Emblem in Destiny 2 on Pro Game Guides.

Destiny 2: How to get the Shadow’s Return Triumph