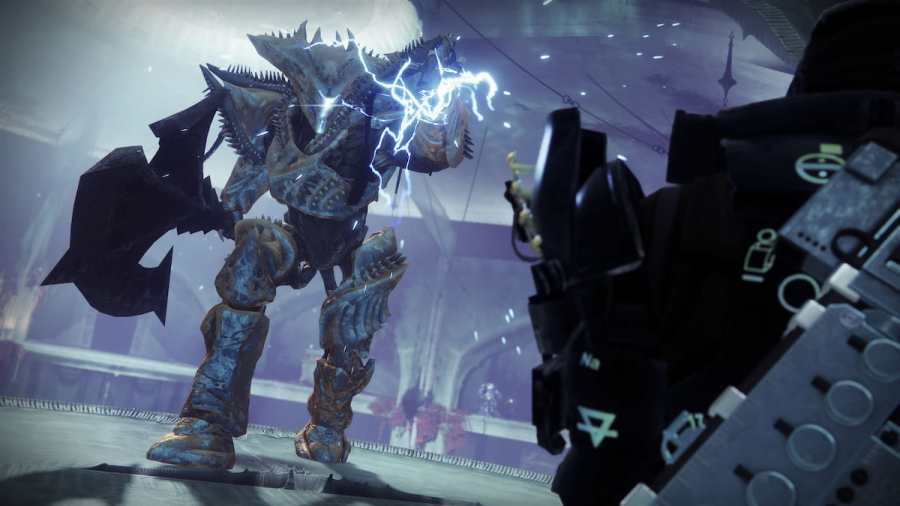 Xivu Arath has long been teased in Destiny 2 lore. She has been an ever-present shadow, looming and haunting the minds of Guardians. The last of the Hive Gods, she has been making her presence known more and more. So, to defeat this enemy, Guardians must know about her. Here is what we know about Destiny 2's God of War.

Xivu Arath is the Hive's God of War. She is the youngest of the three Hive Gods with her elders being Savathun, the Witch Queen, and Oryx, the Taken King. As the Avatar of War, she is responsible for leading the armies of the Hive and increasing her powers through the core brutality that is the Sword Logic.

Xivu Arath began life on the Fundament, a gas giant, with her sisters Aurash and Sathona. She was the youngest daughter of the Osmium King and originally known as Xi Ro. This young krill's primary goal was to become a warrior and Knight in her father's service. To this aim, she captured six of the stormjoys' bait stars. These bait stars were actually the tips of tentacles attached to the stormjoys that were predatory creatures resembling living clouds and would drift over landmasses, attracting their prey and delivering death to them.

Unfortunately, life would take a turn for young Xi Ro and her sisters. Their father had become mad and obsessed with the end of their world, the Syzygy. Betrayed by his advisor, Taox, and murdered by the rival Helium Drinkers, the three sisters escaped their home using the bait stars captured by Xi Ro.

The three sisters swore a blood oath to avenge their father and murder Taox. Specifically, Xi Ro swore upon her left eye. Using an ancient, high-tech ship, the sisters dove deep into the Fundament's oceans at the urging of their father's worm. Of the three, Xi Ro was the most hesitant but was ultimately persuaded by her sisters.

During their journey to the depths, they encountered the Leviathan, a legendary creature to the Krill. It told them that they would need to choose between the Light and the Darkness, but it couldn't offer them a way to reverse the Syzygy, which had already begun. Despite the Leviathan's advice to go to the Light, the sisters listened to their father's worm and headed toward the Darkness.

At the core of the Fundament, the three sisters met the five Worm Gods. These gods offered the sisters and the Krill a way to escape Fundament and achieve immortality. The price was that the Krill would need to take in the larvae as symbiotes and that the sisters must always pursue their nature. For Xi Ro, this meant she must always test her might. Thus, the Krill were reborn as the Hive.

Related: How to get the Star Baker Seal and Title in Destiny 2

Reborn as Xivu Arath, the youngest sister joined her siblings in their war against the Ammonites who had allied with the Traveler and given asylum to Taox. In a war of genocide, the Sword Logic fed the sisters and their worms. Eventually, the siblings began to slay one another, each coming back stronger and stronger.

Rather than establish a court like her siblings, Xivu Arath declared that her court would be wherever war was found. This ultimately proved to be the undoing of the Cabal homeworld of Torobatl. Savathun, through her cunning, corrupted the Evocate-General, Umun'arath, and turned them into a worshipper of Xivu Arath. Umun'arath began a Hive ritual which was unwittingly completed by Caiatl when she slew the traitor. This act opened a portal that allowed Xivu Arath to invade the planet and claim her "overdue" tribute. The Cabal were forced to flee their homeworld and venture into the Sol system for refuge.

This spurred Xivu Arath to spawn Cryptoliths throughout the system and galaxy, which would corrupt every being that came within range. These Cryptoliths turned many into Wrathborn subjects, beholden to the Avatar of War's whims.

Related: Who is Ana Bray in Destiny 2?

Despite this act of generosity from Savathun, Xivu Arath began to hunt down her sister. In order to escape her pursuer, Savathun possessed the former Warlock, Osiris. There, she hid in the Last City before being discovered by the Vanguard and Mara Sov. The Awoken Queen had just recently avoided an attempt on her life, which resulted in Mara's coven of Techeuns being captured in the Ascendant Plane.

The Guardian, aided by others, was eventually able to rescue the Tech Witches from Xivu Arath and restore the Ley Lines in the Ascendant Realm. This would be necessary to complete a bargain between Mara Sov and Savathun. The Witch Queen would release Osiris if the Awoken Queen would remove the worm inside Savathun. Xivu Arath, now aware of what was transpiring, sent her champions to stop the ritual, but they were defeated by the Guardians.

Now, with Savathun dead and unable to be resurrected by her Ghost, Xivu Arath is the last of the Hive Gods. Her attacks have only become more aggressive as she tries to obtain Rasputin's arsenal. It falls to the Guardian, the Bray family, and Mara Sov to find a way to restore the AI Warmind so that it might fight off Xivu Arath's forces. And this takes us to the present, where Season of the Seraph plays out on a weekly basis, drip feeding the story to players everywhere.