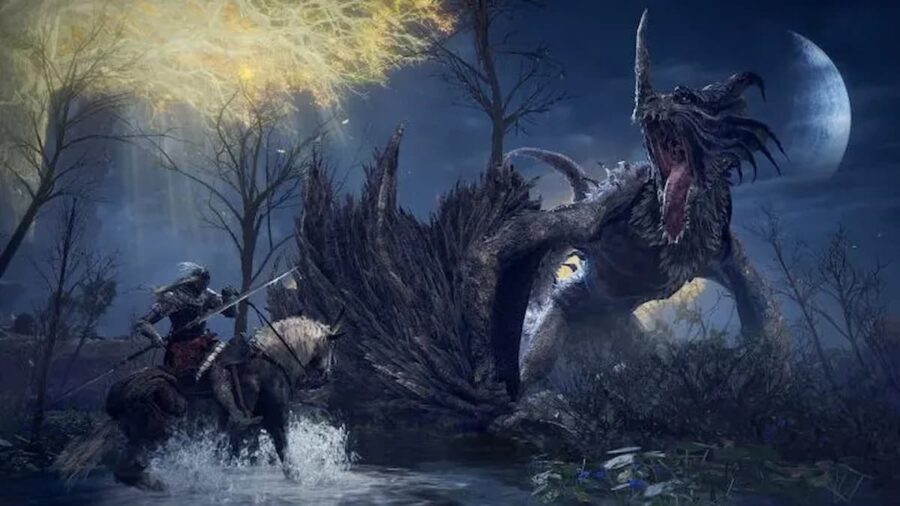 Image Via From Software

What's a fantasy epic without dragons to hunt down? For fans of those magical lizards, Elden Ring has them in spades. However, tracking them down can be quite a challenge. But conquering that challenge will reward the Tarnished with vast sums of Runes and Dragon hearts, which can be exchanged for powerful spells.

Where are the dragons in Elden Ring?

Agheel is one of the first dragons players will encounter in their playthrough. He is located in the aptly named Agheel Lake in Limgrave.

Greyoll is the largest of all dragons and can be found in Caelid. The poor beast is incapable of moving and is often the target of newer players looking for quick and easy levels.

Related: How to get the Crimson Amber Medallion +2 in Elden Ring

Located on a bridge just south of the Farum Greatbridge Site of Grace in Caelid is Greyll. Greyll dominates the bridge and dares any to cross it by raining down fire.

Caelid is just lousy with dragons. The next one is Decaying Ekzykes, who can be found meandering about southern Caelid.

Calling Liurnia of the Lakes its home is the Glintstone Dragon Smarag. It is only a hop, skip, and a jump away from the Crystalline Woods Site of Grace.

Adula is a unique fight in that it is broken into two phases in different locations. The first location is near Caria Manor, and the second is close to the Cathedral of Manus Celes.

Located in the desolate and frigid lands of the northeast is Borealis. By heading to the Freezing Lake Site of Grace, Tarnished will be able to brave the foul beast's blizzard and put it down.

Magma Wrym Makar makes its home north of Liurnia of the Lakes and just inside the entrance to the Altus Plains. For a quicker run, players will want to use the Ruin-Strewn Precipice Site of Grace.

Residing in the frozen river near the Albinauric Rise is the Great Wyrm Theodorix. To access this fight, Tarnished will need both halves of the Haligtree Secret Medallion. Once acquired, they will need to use it at the Grand Lift of Rold.

Remember when we said that Adula was a unique fight because it's broken up into two phases? It is, but not wholly unique. Lansseax has a similar method of operation. The first fight takes place close to the Abandonded Coffin Site of Grace, and the second part is close to the Sainted Hero's Grave.

Neighboring Nokron and the Siofra Aqueduct are the Deeproot Depths. Tucked away in this foul abyss is Fortissax. To access this fight, players will need to offer the Cursemark of Death to Fia after she takes over the Prince of Death's Throne.

Locked away in the Crumbling Farum Azula is the Dragonlord Placidusax. This is the last and one of the most challenging dragon's in the game.

For more Elden Ring goodies, check out How to get to the Queen’s Chamber in Elden Ring on Pro Game Guides.

All Dragon Locations in Elden Ring