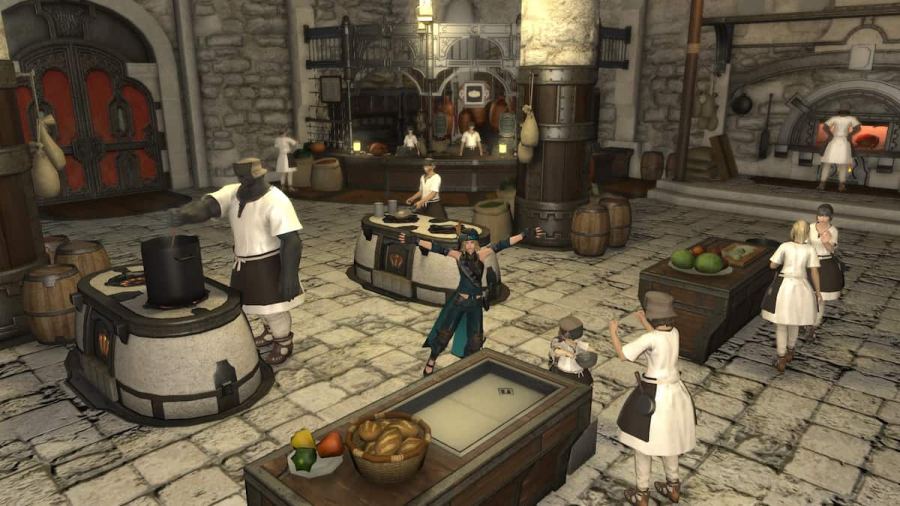 In Final Fantasy XIV, the Culinarian job is one of the eight crafting, or jobs in the Disciples of the Hand. As you might expect, they cook things, and being a Culinarian allows you to create powerful food buffs that will provide you and others with bonuses to DPS and other stats. But the road to max level Culinarian is fairly long, so here’s our full guide to the Culinarian Class Quests.

Culinarian is one of the more complex crafting quests because each of the deliverables requires multiple ingredients. However, the hand-ins are usually just singular, so you can choose one of two methods:

The benefit to the first method is you’ll gain experience faster and be able to level up your Culinarian easily, but if you’re just looking for the quickest and easiest method, then its fine to just buy the required items. And if there’s one you’re struggling with, just skip it! Buy it on the market board and move forward.

Also, while gear is important, it’s probably not worth spending on it until you’re locked out from crafting. You’ll receive enough gear from quests each time to keep up. You will likely not need to buy any Culinarian gear until level 70.

Below is a guide to all the Culinarian quests in A Realm Reborn (ARR). These will take you from unlocking the class until level 50 and possibly beyond with any experience buffs you might have.

Way of the Culinarian - Level 1

You don’t even need to leave The Bismark (Culinarian’s Guild) for the first quest. Head to Jossy <Guild Supplier>, buy some Maple Sap and make some Maple Syrup. Easy!

Making the Maple Syrup will likely only get you to level two or three. So quickly make some of the other easy recipes to hit level five, then speak to Lyngsath (X: 10, Y: 8) again. This time he wants Grilled Trout. Don’t worry about grabbing a rod for the fish, though. Head to The Hyaline X: 10.4, Y 13.7 in the Upper Decks to purchase some Princess Trout for the dish.

Dodo it Yourself - Level 10

This is another one where you don’t have to leave the guild. Buy the items from Jossy, and send and deliver servings of the grilled dodo to Ingham.

Next is another one you won’t need to leave the guild to make. It’s a meat Miq'abob. If you’re struggling for levels, go through and make any recipes you’ve not yet completed. The experience from completing each quest should give you around two levels, but you’ll need to pad the rest with crafting or Levequests.

You’ll have to struggle to find your own ingredients instead of just using the guild shop. This starts off simply with the Pixie Plums. Find them and turn them into Dried Plums

Back to things you can gather pretty easily. All these items are available in the Guild, so just purchase them and make your Aldgoat steak.

This is your first quest that will require a High Quality (HQ) item. To make a HQ item, you’ll need to make sure the quality of the item meets the threshold for 100% quality when synthesizing it. Alternatively, the quality doesn’t have to be 100%, but you’ll risk a chance of not getting the HQ item. From now on, all quests will require HQ or Collectable items to complete unless otherwise stated.

This is kind of a story mission that has you learn about running a restaurant. But really, the trick is you’ll need to gather the awkward ingredients for Ratatouille. Again, this needs to be HQ.

Diplomacy of the Skillet -  Level 40

The first multi-dish delivery will require a lot of item gathering for the final result. I’d suggest gathering most of these materials from the Market Board rather than yourself, as a lot of these are quite high-level ingredients.

Another more complex list of ingredients, mainly for the items that make it up. Again, we suggest getting these from the Market Board for ease.

Revenge of the Chefsbane - Level 50

The finale of the ARR quests sees you make a full feast for the Chefsbane. You’ll either need to go hunting creatures for all these ingredients or rely heavily on the marketboard. Either way, it will take you some time to gather all these materials. And after making them, you’ll likely rocket past level 50 and towards level 60!

Related: How to get the Miw Miisv mount in FFXIV

You’ll more than likely be far beyond level 50 by the time you finish the final quest of ARR Culinarian, as a result, you should be able to breeze into the Heavensward quests with ease. But the quests themselves will be some of the hardest and most frustrating, so keep going!

This is an intro quest, there’s no deliverables, and you’ll receive a trio of Commercial Engineering Manuals.

The next four quests are some of the most annoying in the Culinarian quest line. Mainly because every recipe is very complex, requires multiple items, and often multiple stages. There’s not much advice here, but make sure you have the cash or patience to get through these.

Looking for some Hot Stuff - Level 55

Three more meals with complex ingredients and making. This is where many people will drop Culinarian, at least for a while, as it’s frustrating to gather everything for this set of quests, but keep going!

Another complex recipe, at least it’s just the one, though.

The Spirit of Hospitality -  Level 60

All done with some of the hardest quests! Enjoy your victory lap.

Like with the Heavensward quests, you’ll likely be higher than level 60 when you start these. That’s no worry, as you’ll have to catch up in levels later in the quest chain.

Flavors of the Far East - Level 60

Another intro quest. No deliverable, just hand it in and get some more Engineering Manuals. Great for leveling up a bit.

Rice to the Occasion - Level 63

You’ll notice that the game has gotten a lot easier as they just give you the ingredients. At this point, it's more about having high enough stats to complete the recipes rather than gathering them.

You get given the ingredients to make the broth. Simple.

Another mission, another time they give you ingredients. Make the fish.

And this concludes the Stormblood Culinarian chain. Since you’re given all the ingredients, this one really tries to make the crafting very hard

For Shadowbringers, the class quest system was radically changed. Instead, it was changed to be more akin to the Custom Delivery system. For Culinarian, you’ll be speaking to Bethric in The Crystarium (X:10.8, Y:8.6). There are six deliveries total. None of this stuff needs to be HQ apart from the quest ones.

The delivery system returns for Endwalker, this time for Studium deliveries. Once again, Culinarians are lumped in with Alchemists, but this is a decidedly food-based quest line. There’s eight quests and six deliveries, just like in Shadowbringers. Complete the quest Inscrutable Tastes to unlock them, then talk to Debroye, Old Sharlayan (X: 5.4, Y: 8.2), after. Each of these items, apart from the HQ ones, are unique Collectables. To get appropriate levels, we suggest using the Levequests on the Scholar’s Harbor for the experience.