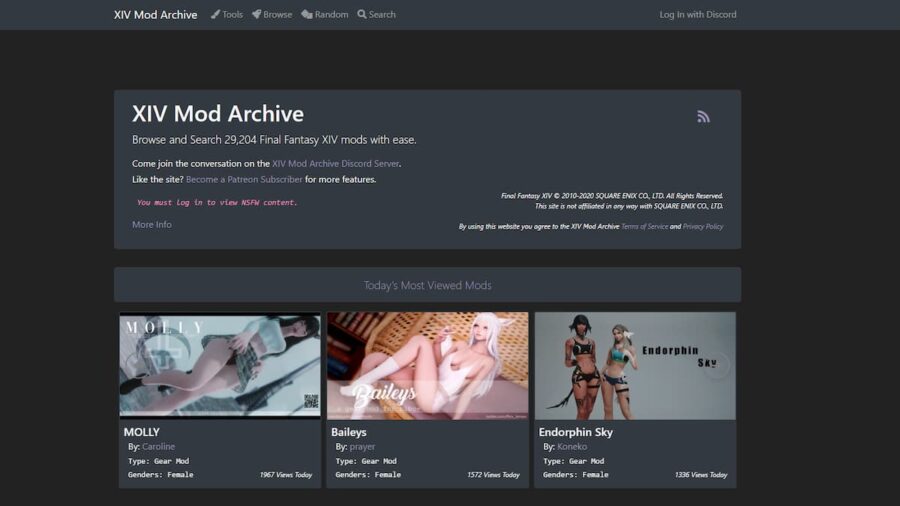 In Final Fantasy XIV, mods and third-party addons are a contentious topic. As a result, some players might have a few reservations before using XIV Mod Archive and other modding sites.

Unfortunately, in Final Fantasy XIV, all third-party tools and addons are prohibited. In a recent post by the game's director Naoki Yoshida, this ban was reiterated. And a day after this post was made, several high-profile streamers were banned after their streams and Videos on Demand (VODs) showed the use of third-party tools.

That said, many players still use third-party tools and rely on sites like XIV Mod Archive. However, in using mods and third-party addons and tools, you do so at your own risk, and you could be banned temporarily or permanently for using them. To be extra safe, if you choose to use mods and addons, never share screenshots or videos of you using them, as this could lead to a ban.

Is XIV Mod Archive safe to use?

On the plus side, XIV Mod Archive is a safe site to use. Many of these mods are purely cosmetic. However, you should be fully familiar with modding game files before using them. Most of the mods will require you to replace files within your Final Fantasy XIV directory, so be sure to back up your files before modding them.

Overall, XIV Mod Archive is a fantastic resource for cosmetic changes and alterations to your Warrior of Light. But let's reiterate: mods and addons are prohibited by the Final Fantasy XIV terms of service (TOS), and you use mods and tools at your own risk.

Will FFXIV mods get you banned & is XIV Mod Archive safe to use?