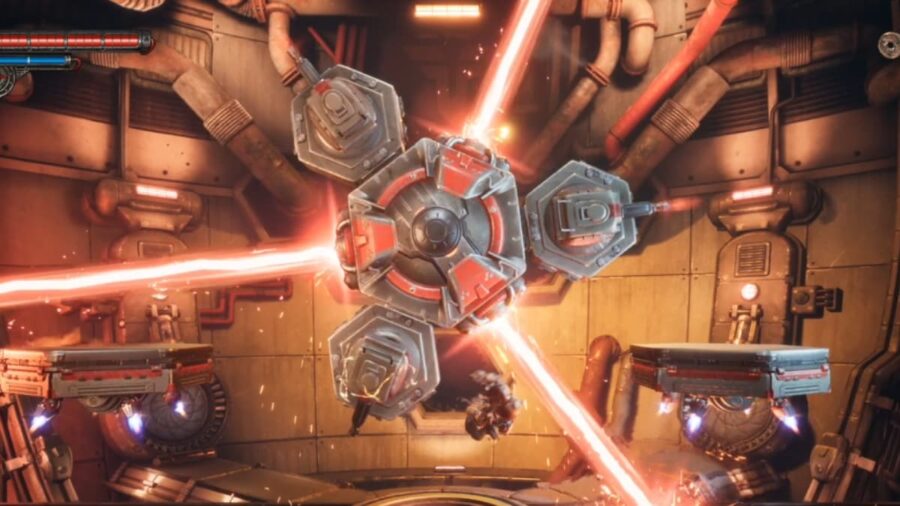 Inside the Power Station, Zapper is not the only boss you have to contend with. Do you remember that crazy robot Master Wu mentioned? Well, the Robotic Core is that crazy robot.

To defeat it, you need to destroy the three gun turrets it uses to shoot you while the Robotic Core is continuously spinning in the air. You have to use aerial moves to damage the turrets. Once the three have been defeated, the middle will light up and vent heat. This is when it becomes vulnerable to damage, so give it everything you have during this. It will start to summon minions to help, so be careful if you're low on health.

But once it recovers, it will start to use different moves. The first thing you'll notice is all the addition of lasers. The Robotic Core will fire three continuous laser beams from its free sides while also shooting you with its turrets. But the lasers will eventually stop, which gives you time to attack the turrets. Don't be greedy, as the lasers will start up again promptly. Once all three turrets are disabled again, hit the center to deal damage.

Its third phase is the hardest of the fight. When the gun turrets fire, the bullets spread more, so you have to dash to avoid these. And the Robotic Core itself spins faster, which means the lasers are also faster. During this, it's best to hide underneath the floating platforms, but more to the side. As the lasers fire in a straight line, you need to make sure the laser hits the floating platform above you, but the platform moves, meaning you have to move with it. It's tricky to do at first. Use the photo below for more details.

The Core will also rotate in the opposite direction at times to attempt to catch you off guard, but when the laser is slow, it allows you to destroy a turret, but the second it starts to speed up, hide under a platform. The lasers and bullets will eventually stop and start attacking the turrets in this small time frame. When all three are blown up, attack the middle one last time, and it should be boss fight over.