The guided missile has made it to Fortnite: Battle Royale! You can launch a rocket at your enemies from afar and control where it goes. Weave through enemy bases and land these on top of your foes!

Update: Guided Missile has Been Removed?!

Originally, the guided missile was nerfed, it had its movement speed reduced and turn radius crippled. However, due to a bug with the weapon it was taken out of the game temporarily. This temporary action, has now turned into a permanent one. Epic announced that the guided missile will now be added to the vault. The vault is a place where they can put an item which removes it from the game, however, it can be added back at a later date. This was done previously to the smoke grenade and the submachine gun (SMG). There's no telling when this controversial weapon will return to the game! For now, it will collect a little dust in the vault. 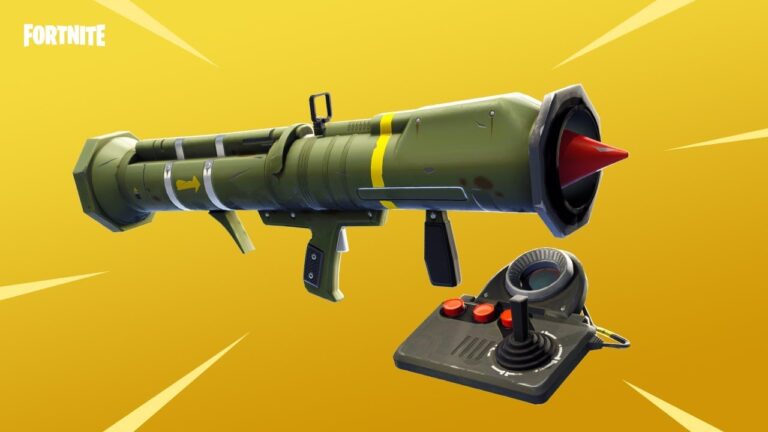 The guided missile is directly controlled by the player that fired it. You get 18 seconds to fly it around while your character is stationary. This obviously leaves you very vulnerable, but if you find a reasonably defensive position you can infiltrate buildings and player built structures. You can disengage from the rocket at anytime. The rocket moves at 1,300 units a second (moves slightly slower than a regular rocket) and has 100 health. It can be shot out of the air, so if you are facing one of these be sure to take it out before it lands on you!

You can have a teammate jump onto the rocket and fly them around. Alternatively you can fire the rocket turn it around, disengage from it, and jump on it to propel yourself forward. You will take damage if you are close to it when it explodes so be careful (your teammate won't, friendly fire is currently off). An even more advanced play is to stand on a constructed floor or ramp, fly the rocket under it, and have your teammate edit it out so you fall onto the rocket. This would allow you to continue to control the rocket while being on top of it (check out this clip as an example)!

Once you fire the rocket you are immediately put behind it and can control it how you normally control your character. It starts off moving slow at first, but then immediately speeds up to its normal travel speed. Once you are flying you'll have 18 seconds to find a target to land it on. At anytime during this, you can disengage from the rocket.

Guided Missile Colors/Rarities & Where to Find it

The guided missile is found in Treasure Chests & Supply Drops. It comes in epic (purple) & legendary (orange) rarities. The rarity seems pretty high, you can go a few games without encountering one of these even if you go deep into the games.