The heavy shotgun has made its way to Fortnite: Battle Royale! Check out all you need to know on this potentially powerful new addition to the game.

Epic has been pretty careful with how they implement new weapons into the game and they haven't really done anything overpowered. This being epic/legendary makes it pretty balanced even though it is relatively powerful. The fact that you can dual-wield them might lead to some issue in the late-game portions of matches. These will be readily available to players at that point, so it remains to be seen if this is too problematic.

The heavy shotgun surprisingly uses... Shotgun ammo! I know this is a shock to you, so try not to faint. The magazine size is 7, so you'll be able to pop off powerful shots quite a bit before needing to reload. 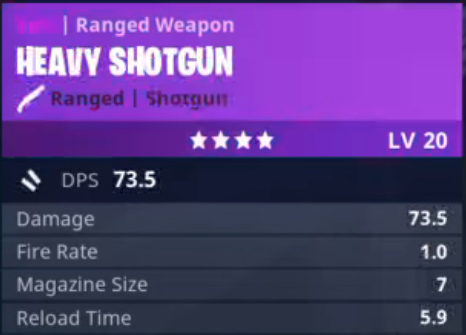 Heavy Shotgun Colors/Rarities & Where to Find it

They heavy shotgun can be found in purple (epic) and orange (legendary) rarity. It is likely to only be found in chests and supply boxes (maybe supply llamas).