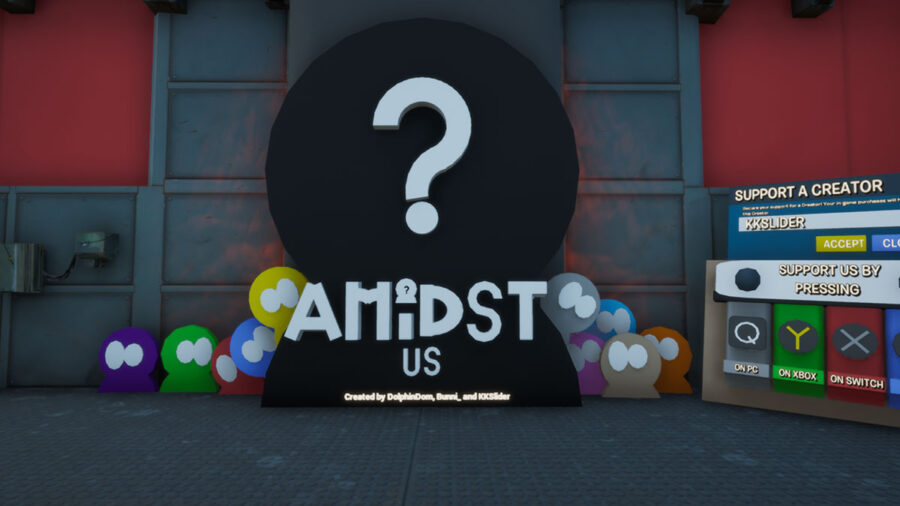 Among Us has been blowing up all over YouTube and Twitch, so naturally it has made its way into Fortnite as a map. The game is a great way to gather up some friends, complete tasks, kill people, and banter among the people you are playing with! While this isn't a 1-to-1 remake, it still gets you close enough to the real thing that you will have a great time and get to play it for free.

Fortnite Among Us Map

The Among Us creative map in Fortnite is called Amidst Us. You can play it by using the code 0288-3600-7090, and entering it into one of the portals in the Fortnite Creative Hub. It has a lot of the same gameplay as the real game, and you can join up with 10 different people.

There can be one or two different imposters and your goal is to eliminate the crewmates without getting caught. The crew can call meetings if they think they know who the imposter is and can vote them out. This is when microphones become un-muted and you can discuss among everyone who you think is the imposter. If you are the imposter, you will want to persuade them to leave you alone and get rid of someone else!

Meetings can be called if a body is found, which is represented by a snowman on the map. You can also hit the emergency meeting button which should be located in the middle of the Control Room.

The imposter has access to the vents that you can hide and get around in to move quickly around the map. You will want to make sure that a crew member doesn't see you going in and out of there because that will give you away. You can also sabotage certain parts of the map as the imposter in these vents.

If you're a crewmate, your goal is to complete the different tasks listed on the screen. If the crew can complete all of the tasks, then that team wins the game! These tasks are a bit more in-depth and skill based in Among Us, in the Fortnite version it's a lot of just clicking various buttons and small other tasks that need to be completed. You will also want to keep your eye on anyone acting suspicious! If someone is following you a bit too closely, then that means they are likely an imposter and you will want to call a meeting to vote them out. If you can vote all of the imposters out, that's another way you can win the game.

Watch how the game is played in this video by Mustard Plays: