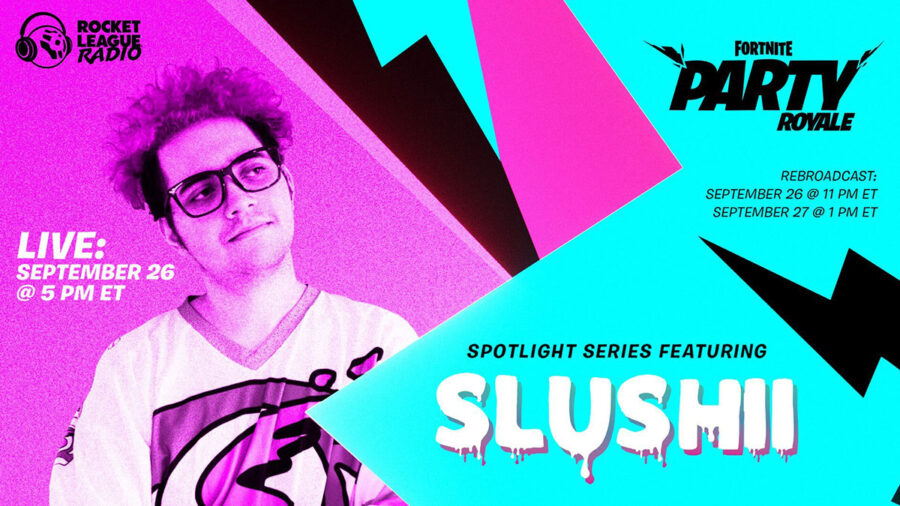 If you've been hyped over Fortnite's Party Royale Spotlight Series then you've got some more reason to be excited now. It looks like Slushii, a DJ, singer and songwriter, will be performing next as part of the ongoing events that Epic is putting on in the game of Fortnite! Slushii joins the likes of Anderson .Paak, Dominic Fike, Kenshi Yonezu, and Diplo who have graced the Party Royale stage!

According to the leaks, Slushii will be premiering a new single during his performance which will be taking place on September 26th, 2020!

If you are unfamiliar with Slushii, he has worked with many popular DJs, including the well-known to Fortnite Marshmello. His most well-known song is probably "LUV U Need U", which can be heard in the video below.

The song LUV U NEED U appeared in the game Rocket League, which has been makes some waves of its own with it's transition to free to play and being added to the Epic Games Store. There's also a collaboration in the works with Rocket League and Fortnite that should yield some cosmetic rewards for any Fortnite player willing to participate!

Epic continues to push the envelope when it comes to live performances, and we will see how far they can go as more musical acts line up to perform. The news of Slushii appearing in the game, comes on the heels of the announcement that BTS will be premiering their choreography video in Fortnite on September 25th. This will also include two BTS themed dance emotes, that will likely be some of the dances featured in that video.

Things are looking up for Fortnite players as more and more artists continue to look to reach the younger audience that the game attracts. We will have to wait and see who is willing to show up next, and if we get future larger scale events like the one that featured Travis Scott!