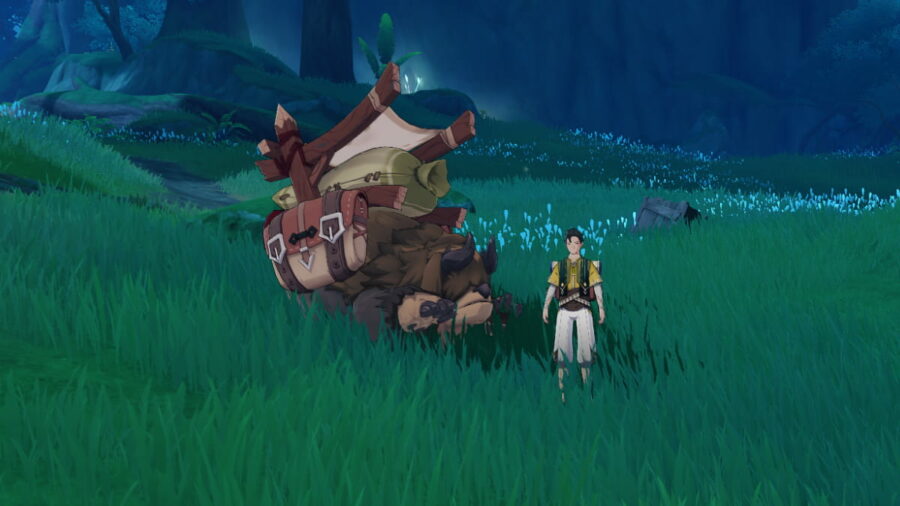 Even Beasts Stumble is a Sumeru World Quest that you can accept in the Yasna Monument after saving a merchant named Elber from some Hilichurls. During this attack, his two Sumpter Beasts ran away with his wares, so you must help him find the two giant creatures.

Start by heading to the road east of Yasna Monument, its exact location is circled in the image below. Once you get close to the area, Paimon will point out that there's a guy being attacked by Hilichurls. This will automatically initiate the World Quest.

If you cannot trigger this World Quest, consider completing the first two Acts of the Sumeru Archon Quest and unlocking the city Reputation Board, which will also unlock many of the gated World Quests in the region.

Defeat the Hilichurls attacking Elber, who will then ask for your help locating his two missing Stumper Beats. Two areas will be highlighted in the mini-map and World Map. You can head to them in any order to find the two Beasts.

Reference the pink circle in the image above for the exact location of the Stumper Beast in the southern quest area. Once you find the Stumper Beast, interact with it to complete this segment.

Reference the pink circle in the image above for the exact location of the Stumper Beast in the northern quest area. You must defeat all the Hilichurls surrounding the Stumper Beast. Once that's done, interact with him to complete the World Quest.

Check out our Genshin Impact The Price hidden World Quest guide to unlock and complete a hard-to-find quest in Sumeru.