If you log into Genshin Impact today, you might be asked to fill in a short survey by in-game email. You might be thinking, what's in it for me? Well, they give you 300 Mora for free with the email and then promise you 20,000 Mora on completion. That should be enticing enough for you! Though in this survey, the details give off a strong hint of what miHiYo wants to change in the future. 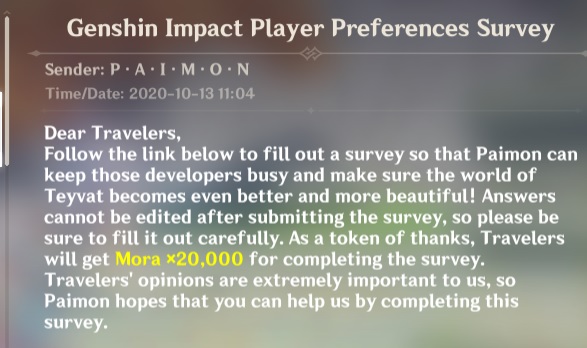 Game developers are always thinking of ways to change the game, including quality of life changes, how to make things flow better, and miHoYo are trying to suss that out with this in-game survey. Many of the questions asked weren't asked about heavy things, such as mechanics, Original Resin usage, or even the gacha system.

The questions were, of course, multiple-choice, how did you feel about this? What motivates you to continue playing? It was more often than taking a more subtle tone of questioning to inquire if anyone cared about certain features like Achievements, Nameplates, and Cosmetic items. Then as you dive deeper into the server, the questions throw subtly out of the window and inquire rather bluntly about how you truly feel about things.

The achievement system, to me, means little, it's never been something I've bothered about it many games, and Genshin Impact is no different. I haven't opened the achievement menu once in my time playing it, maybe if the rewards were worth completing but getting 5 Primogems as a reward is not worth it. Completing achievements passively when playing is fine, but going out of your way for a measly reward is not worth the effort.

It's better to be honest with surveys, or things will never change.

Nameplates were next on the survey, asking if I cared about them, and in all honestly, I've never noticed them in the game. Even in games such as Monster Hunter, where you can get dozen of various nameplates, it's never been something that I was interested in. I doubt any reward miHoYo offers will be enough for me to start giving a hoot about nameplates.

Also, nameplates are heavily intertwined with the friendship level system, which takes a while to get anywhere with. Once again, a passive element to the game is fine, but purposely acquiring nameplates is not for me.

There was quite an extensive list of what cosmetic content I would be interested in, and personally, it all depends. Fancy frames or avatar images don't hold much appeal to me, but Character outfits? That's a different kettle of fish entirely. I'd definitely be interested in buying some costumes! Furthermore, I can guarantee many people would happily pay real-world money for costumes for their favorite characters, without any hesitation whatsoever.

It's not saying that all of these features will come to pass; it's more of this survey will highlight what people want, which will be the first to change. These elements are side projects to the core of the gameplay. Plus, it's another reason to try and open up people's wallets to spend in-game.

Where to find Aralia Wood in Genshin Impact