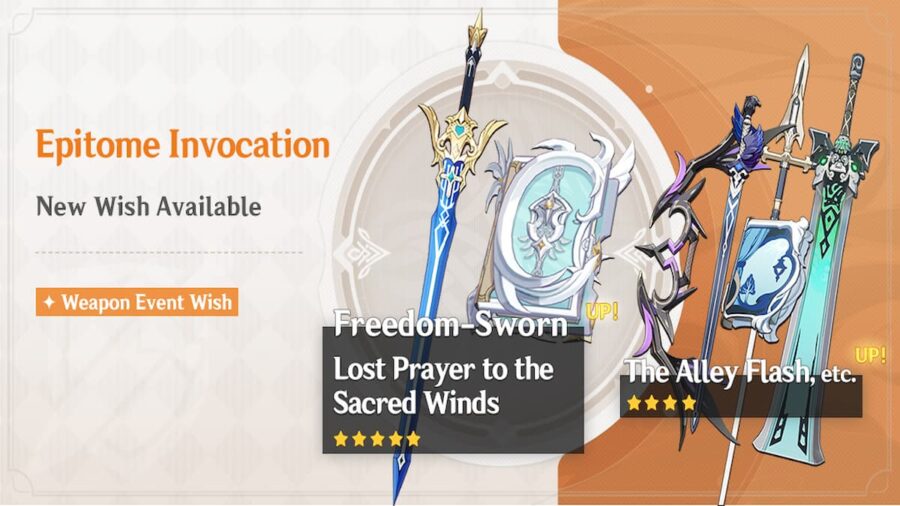 With the advent of Genshin Impact's newest banners, "Leaves in the Wind" and "Sparkling Steps," players are able to pull for either Kaedehara Kazuha or Klee. Since the newly released 4-star character Heizou is available on both banners, the decision boils down to the player's personal preference.

Most players have already made up their mind, depending on which 5-star character they seek. However, weapon banners can be intimidating, due to their dependence on character builds. Which weapon should you pull for, Freedom-Sworn or Lost Prayer to the Sacred Winds?

Genshin Impact: Which 5 star weapon is better, Freedom-Sworn or Lost Prayer to the Sacred Winds?

Freedom-Sworn is a five-star sword that increases a party's damage even if the wielder is not currently on the field. It is typically used on support characters, in order to buff the party. This sword's primary stat is ATK, while its secondary stat is Elemental Mastery. These stats allow the wielder to do a decent amount of damage on their own, but also enable other characters to trigger elemental reactions.

This sword is most effective when paired with Kaedehara Kazuha, Jean, Kaeya, and other supportive characters. Although this sword has competition with Sacrificial Sword, if you plan on pairing it with Kazuha, it is the superior choice.

Related: How to get Diluc’s Red Dead of Night skin in Genshin Impact

Lost Prayer to the Sacred Winds is a catalyst weapon that grants its wielder movement speed and an Elemental DMG bonus. It is typically used on main DPS characters that use catalyst weapons, especially those who scale with CRIT rate.

This weapon's primary stat is ATK, while its secondary stat is CRIT rate. This weapon is capable of dishing out heavy damage, while also providing more opportunities for CRIT damage.

This catalyst is most effective when paired with Klee, Lisa, Yanfei, and other DPS catalyst users. Lost Prayer to the Sacred Winds is one of the best catalyst weapons in the game currently, and is definitely worth the investment, especially if you own Klee. It lacks any notable competition at the moment.

The four-star weapons are available regardless of whether you choose to pull for Freedom-Sworn or Lost Prayer to the Sacred Winds. These weapons include:

Genshin Impact: Should you pull for Freedom-Sworn or Lost Prayer to the Sacred Winds?