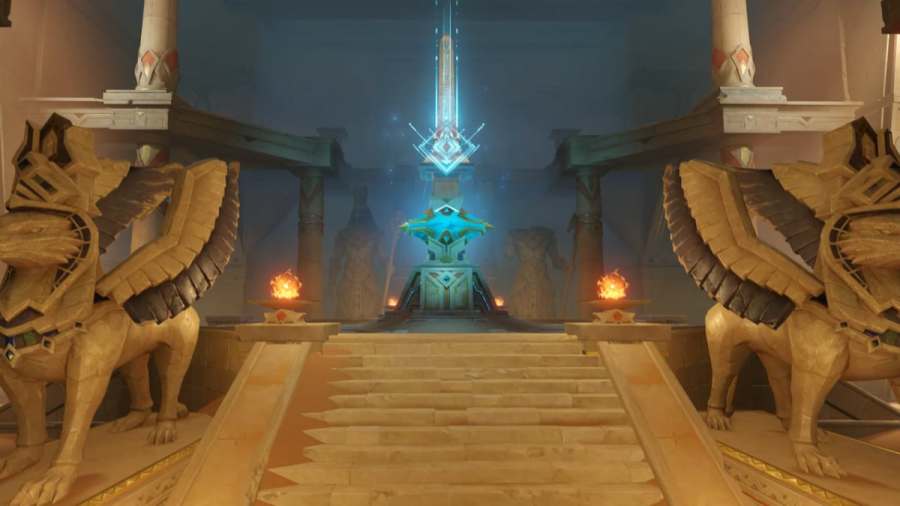 Dreams Beneath the Searing Sand is the fourth part of the Golden Slumber World Questline, detailing the archaeological team's expedition to the Khaj-Nisut. One segment involves activating the mechanism in the center of the hall by solving three puzzles, which you can do in any order.

Head to the area circled in the image above to find the first device you must interact with to release a Primal Ember. Follow the Primal Ember to the room below. Defeat the Primal Construct and release the Primal Ember from the second device, and wait until it reaches its post. Once done, return to the main room.

Once you're back in the main room, look up to find that the Control Unit above the first device has been unlocked. Climb the stairs or use the Four-Leaf Sigil to propel yourself towards it and interact with it to complete the first puzzle.

Head to the area circled in the image above to find the second device. Interact with it to release a Primal Ember, which you must follow toward the room's other side. It will lead you to a floor below, toward a room with a Primal Construct. Defeat the Primal Construct to proceed.

Related: Cyno’s Special Dish Recipe and how to cook it in Genshin Impact

Head to the area circled in the image above to find the third device. Interact with it to release a Primal Ember, which you need to follow toward the elevator in front of it. Then interact with the elevator to go to a lower floor. The room is filled with barriers, so follow these directions to make it to the other side.

First, turn left until you feel the edge of the barrier, then move forward. Stick to the slightly raised flooring in the center of the room and turn right in between the barriers at the top and bottom. Keep moving until you're at the very right of the room, then move forward to find the device. Interact with the device to release the Primal Ember, which will go to its post.

Check out our guide on How to Look for the materials that Kayvan needs in Genshin Impact to complete a Sumeru Daily Commission.