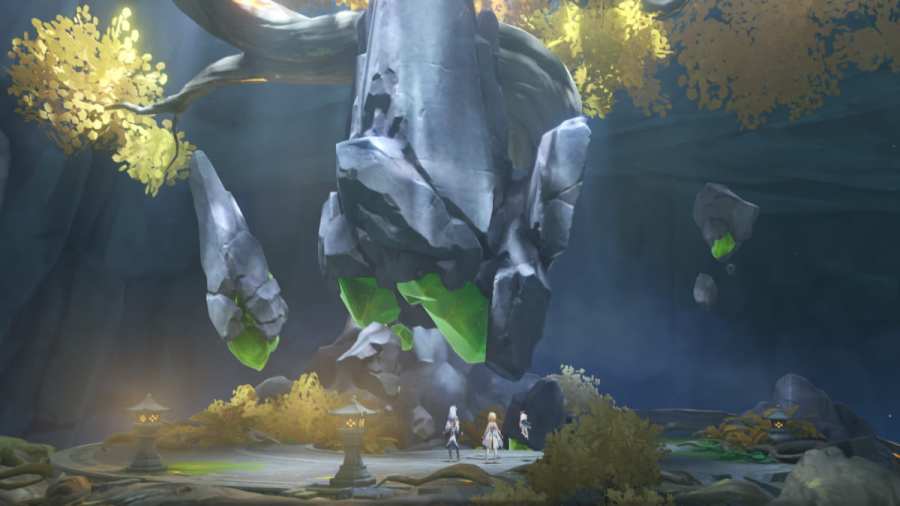 The Crane Returns to the Wild is a four-part Interlude Chapter to the Archon Quest, which revolves around rebuilding the Jade Chamber. The second quest, Seagaze Sunset, will bring you to the Sea Gazer's Abode in search of the ultra-rare Sunset Vermillionite to once again raise the Jade Chamber to the skies.

The Adepti's Abode is a Domain that you can only enter while doing this quest. Once you're done, you can't go back in again. There are a few small puzzles hidden inside the Domain—read on to find out how to solve them.

Upon entering, you'll be tasked to activate the seal on the Ancient Array Core. Start by lighting up the three Geo Lamps indicated by the quest marker. You can do so by picking up a Geograna from Geo rocks, which can be destroyed with Geo Damage or melee Attacks. After obtaining a Geograna, approach a nearby Geo Lamp to light it up.

After defeating the wave of monsters, the Ancient Array Core will unlock. Attack it to prompt a cutscene that will cause the barrier on the ground to disappear, dropping you down. Be careful about fall Damage!

Related: How to complete the Arataki Itto Story Quest Domain in Genshin Impact

After landing, the same pattern will repeat: clear the wave of enemies, then attack the Ancient Array Core. The enemy lineup is more formidable this time around, including a Geovishap. But once the Ancient Array Core's HP drops to zero, another cutscene will play, and you'll find yourself dropping further into the depths of the Sea Gazer's Abode.

Follow the Seelie into the ruin—make sure to avoid the laser-like obstacles. Head deeper inside and you'll find Stone Walls. When you interact with them, they'll move further into the ruin.

You'll encounter one more Ancient Array Core. Like the previous ones, clear the waves of monsters and attack the Core to unlock the next area in the Domain. Watch out for the Geovishap and Ruin Graders.

Once that's done, follow the Seelie to obtain an Exquisite Chest. Then follow the quest marker to the Sunset Vermillionite, which will prompt a dialogue with Shenhe and complete the Domain. Don't forget to open the Precious Chest before leaving!

Check out our guide on How to complete The Subterranean Trials of Drake and Serpent World Quest in Enkanomiya Genshin Impact to help you explore Enkanomiya, which was released at the same time as this Domain.