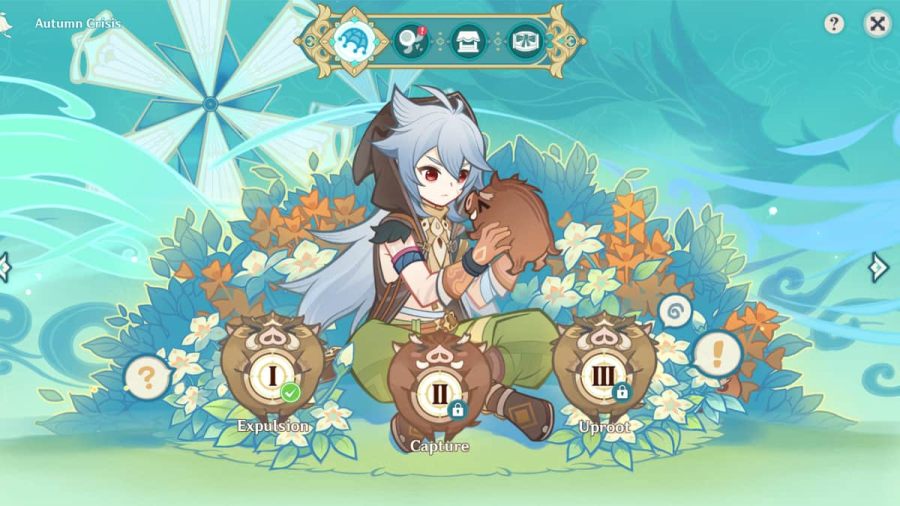 Autumn Crisis is one of the four activities that you can enjoy in the Genshin Impact Of Ballads and Brews event, which celebrates the Weinlesefest, one of Monstadt's most important holidays. The event runs from September 29, 2022, to October 17, 2022, while you can exchange Festive Fever rewards until October 24, 2022.

In the Autumn Crisis Challenge, you need to help another desperate Amurta student from Sumeru named Farabi, who's interested in writing about the existence of Snowboars.

This Challenge is divided into three parts: Expulsion, Capture, and Uproot. They unlock gradually throughout the event period, and you can access them and claim rewards by heading to the Event Details section of the event menu.

How to complete Autumn Crisis: Expulsion in the Of Ballads and Brews event in Genshin Impact

In Autumn Crisis: Expulsion, you need to attack as many Forest Boars, Piglets, and Snowboars as possible to collect points. Your goal is to amass 2,000 points within two minutes to get all of the Primogem rewards. Each type of boar will merit you the following number of points:

During the Challenge, you can only use the Traveler's Normal Attack, so you need the help of buffs to defeat the more powerful Boars.

You can pick up a buff called Hunter's Shield, a small yellow orb on the ground. When the buff is active, you can deal damage against Forest Boars and Snowboars, and restore your Stamina. Meanwhile, Traps will regularly be released by small machines around the area to expel Forest Boars, but they are ineffective against Snowboars.

How to complete Autumn Crisis: Capture in the Of Ballads and Brews event in Genshin Impact

The Autumn Crisis: Capture Challenge has a seven-minute time limit, where you must capture 15 animals in total. To get all of the Primogem rewards, you must capture all four different animals on top of completing the Challenge. Crimson Foxes and Forest Boars are often on the field, White Pigeons are usually resting on rocks, and Scarletbeak Ducks are in the water.

The mechanics for Capture are fairly simple and similar to how the Omni-Ubiquity Net works. You can only capture animals within the highlighted areas in the mini-map. Once you spot an animal, hold the Elemental Skill button to aim, and release it to capture the target. Watch out as the animals are quite vigilant and will run away or attack you if you get too close—avoid this by making sure that the red bar above their heads doesn't become a full circle.

There are Smoke Machines around the field that you can activate to reduce the animals' visibility, making it difficult for them to spot you.

How to complete Autumn Crisis: Uproot in the Of Ballads and Brews event in Genshin Impact

The Snowboar King will generally be in an enraged state, which you need to quell by doing any of the following:

Once the Snowboar King is no longer enraged, quickly hold and release the Elemental Skill button to attempt to capture it. Since the target is so strong, you need to do this multiple times before eventually capturing it.

You only have a small window before the Snowboar King becomes enraged again, so use the capture net as many times as you can. Repeat the steps until its HP is fully depleted, completing the Challenge.

Check out our Genshin Impact Secret of the Scorching Desert Mysterious Ruins Domain walkthrough to help you explore Sumeru.