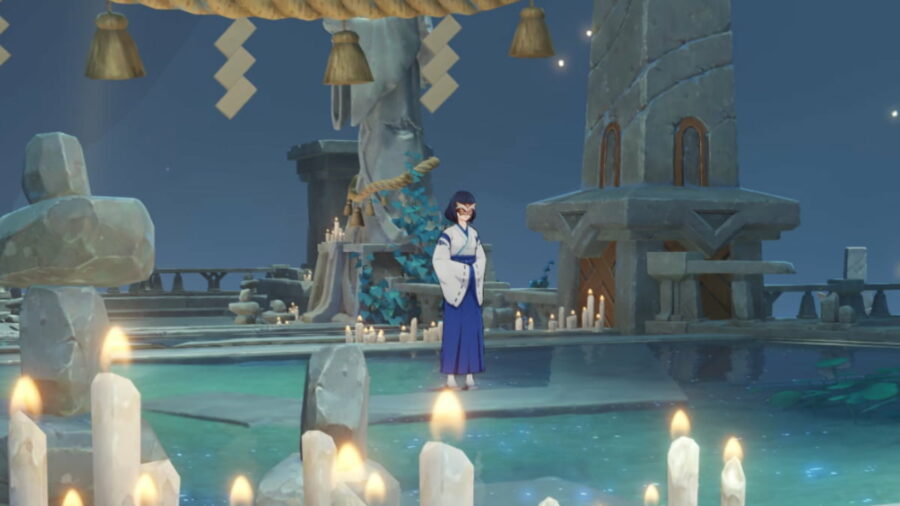 The Three Realms Gateway Offering is a 40-day event that runs from Feb. 17, 2022, to Mar. 30, 2022. It's set in Enkanomiya, the region hidden beneath Watatsumi Island. The core Event Questline, the Aphotic Diffusal, uncovers the story of the Vishap-people, Reptilians, as well as bits of Enkanomiya's dark past.

Reunion With the Abyss Lector

Start the quest by speaking to Tsumi, who will ask you to meet the "culprit" responsible for the darkness blanketing Enkanomiya. Follow the quest marker to the east of the Three Realms Gateway Offering, in what would normally be the Evernight Temple. There, you'll meet The Thing Calling Itself "Enjou", a character who played a huge role in the main Enkanomiya storyline.

Make sure to bring a battle-ready team with a Hydro applicator, as a battle against the Abyss Lector will prompt. After defeating him, he'll do what he does best: drop a bunch of lore, and then give you a part of a pendant.

Related: How to solve the locked Electro Monuments puzzle west of the Three Realms Gateway Offering in Genshin Impact

Once the dialogue is over, head back to the Dainichi Mikoshi, only to find that Tsumi has disappeared. You'll be prompted to use three mechanisms to guide the light back to the giant building to remove the darkness within the region.

After completing that segment of the quest, prepare a battle-ready team with an archer that can deal damage, then head back to the Dainichi Mikoshi and ride the elevator down to where the Bathysmal Vishap Herd would normally be.

A battle against the Primordial Bathysmal Vishap Herd will start as soon as the elevator drops you down. Be careful, as their attack patterns are a little different than usual.

One of the Vishaps will take to the sky and attack from there, while another will attack you from the ground. You need to defeat the one in the sky before the ground Vishap dies. Otherwise, the ground Vishap will revive over and over again.

Once the Vishap battle is over, head back to the entrance of the Dainichi Mikoshi and talk to Tsumi. You'll give her the two parts of the Serpent pendant. After, go to Watatsumi Island and report your findings to Sangonomiya Kokomi, completing the Three Realms Gateway Offering questline.

Check out our guide on How to solve the Guiding Light Mirror puzzle on the altar south of the Three Realms Gateway Offering in Genshin Impact to help you explore the region.