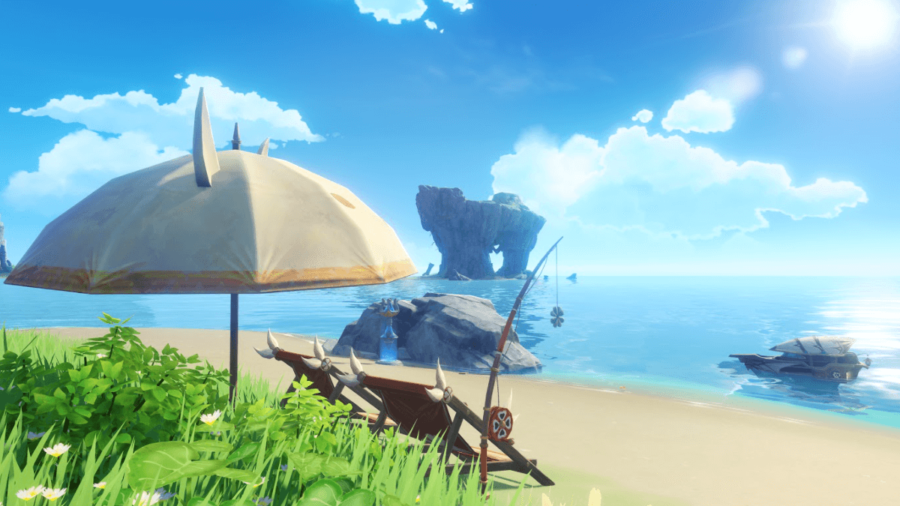 Upon reaching the Golden Apple Archipelago (via Dvalin's back, during one exciting cameo!), the first task you're given is to find and light up all of the devices scattered around the islands. A heavy fog makes it difficult to navigate the waters, so you'll need to activate all of these devices—Teleport Waypoints—to advance in your quest.

There are four available Waypoints so far in this region, since you automatically get the Waypoint on Pudding Isle. You'll need to activate the other three Teleport Waypoints on other islands.

Board your Waverider, which is almost directly beneath your starting point on Pudding Isle, and follow the glowing lights through the fog. These lights, or glimmering beacons, will lead you to the islands that hold the Teleport Waypoints you'll need to interact with. Don't stray too far from these beacons or skip the sequence in which they appear, since doing so will throw you off course and make it more difficult to navigate.

Following the gleaming beacons will lead you to the islands in this order:

Judging by directions, you'll be heading north towards Twinning Isle from Pudding Isle. From Twinning, you'll head southeast towards Broken Isle, then from there, south to Minacious Isle.

After you activate the final Teleport Waypoint on Minacious Isle, the fog covering the Golden Apple Archipelago will clear. You'll then receive a new directive to go back to Pudding Isle.

Check out the Patch Notes for 1.6 Midsummer Island Adventure to see all upcoming Genshin Impact content, or snag free rewards using our Genshin Impact Codes article. Don't forget to take our What is your Genshin Impact Vision quiz to find out which Archon you've been blessed by.