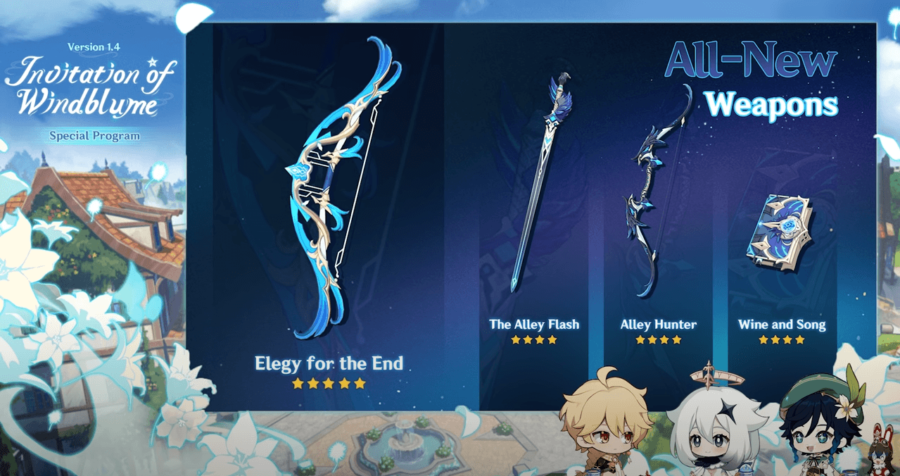 With a new update comes new loot! Elegy for the End and Skyward Blade are the latest 5-star weapons to grace Genshin Impact in its 1.4 version update. Read on to find out how you can obtain these powerful artifacts and make your characters even more formidable.

Note: Elegy for the End and Skyward Blade are both event-exclusive, meaning they will only be offered for a limited time. They are not available to pull from the standard wish banner, Wanderlust Invocation.

Elegy for the End (Bow)

A bow as lovely as any bard's lyre, its arrows pierce the heart like a lamenting sigh.

Elegy for the End is a new 5-star bow featured in the 1.4 Epitome Invocation wish banner, in which it receives a significant drop-rate boost. To cast Wishes, you’ll need to acquire Fates, most commonly done by converting your hard-earned primogems.

Its special ability, “The Parting Refrain,” primarily increases Elemental Recharge and Elemental Mastery. When the character wielding this weapon hits enemies with an Elemental Burst four times, all nearby party members will also receive an ATK increase of 20%.

Related: How to get the Rust Bow in Genshin Impact

The sword of a knight that symbolizes the restored honor of Dvalin. The blessings of the Anemo Archon rest on the fuller of the blade, imbuing the sword with the powers of the sky and the wind.

Skyward Blade is a new 5-star sword featured in the 1.4 Epitome Invocation wish banner, in which it receives a significant drop-rate boost.

Its special ability, “Sky-Piercing Fang,” increases CRIT rate by 4%. When the character wielding this weapon uses an Elemental Burst, the sword increases Movement SPD by 10%, increases ATK SPD by 10%, and increases DMG of both Normal and Charged hits equal to 20% of ATK.

How to Get Elegy for the End and Skyward Blade

Both new weapons are only available in the latest Epitome Invocation wish banner. As featured weapons, they receive a drop-rate boost that raises the standard chance of obtaining a 5-star weapon.

Pity guarantees work for weapon banners just like they do for characters, except the number to trigger a pity 5-star wish for weapons is 80 instead of 90. If you cast 79 wishes in Epitome Invocation and still haven’t received a 5-star weapon, your next pull is guaranteed to grant you one.

Check out our article on the Genshin Impact 1.4 Patch Notes to see which new characters and events are available! We'll also keep you in the know on upcoming banners and Genshin Impact code updates.