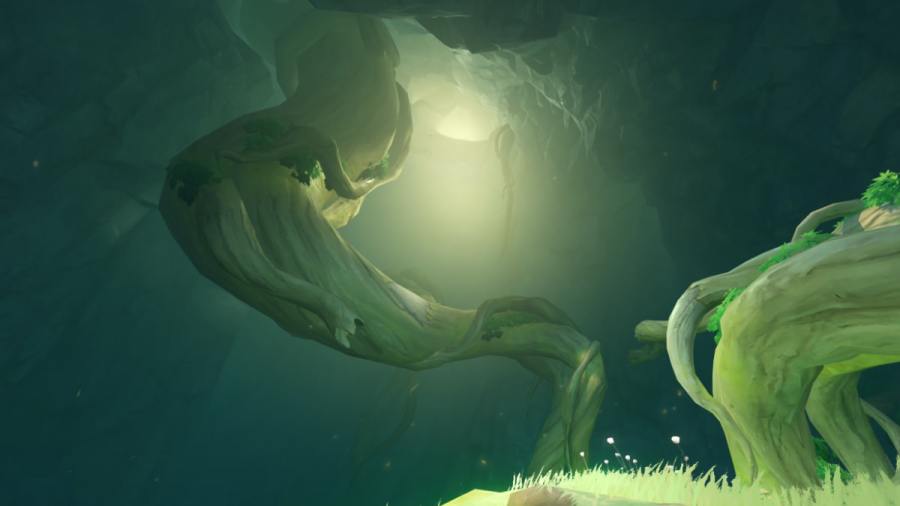 The traditional road to Genshin Impact's nation of wisdom, Sumeru, begins by following the path from Cinnabar Cliff, which you're guided to through the Archon Quest Chapter III: Act I - A Forest of Change. However, there's a more unconventional road to the rainforest region.

In The Chasm's Underground Mines, there's an odd expanse of greenery southeast of The Chasm: Main Mining Area. By climbing the giant tree, you'll be able to reach Sumeru, proving that the map of the Underground Mines is actually upside down.

How to get to Sumeru from a hidden path in The Chasm: Underground Mines in Genshin Impact

You first need to go to the watery area southeast of The Chasm: Main Mining Area. If you haven't already unlocked it, check out our guide on the People of the Valley of Life Hidden Achievement for a step-by-step to locating the area and unlocking an Achievement while you're at it.

Next, you need to climb the giant tree until you get to the brightest point at the top. There's a branch with a lone mushroom beside the rocky cliffs, where the arrow is pointing above. This is the highest point you'll be able to climb. Carefully climb there to find a glowing spot. Keep in mind that the Portable Waypoint pictured above was added for clarity—there is normally no Waypoint, so you have to manually climb up.

Interact with the glowing spot beside the mushroom to Move Up. This will automatically teleport you to the waterfall in Gandharva Ville.

Related: How to get the If Not Us, Then Who? Hidden Achievement in Genshin Impact

How to get to The Chasm: Underground Mines from Sumeru in Genshin Impact

Check out our guide on How to get the Though to the Earth I May Return… Sumeru Hidden Achievement in Genshin Impact here on Pro Game Guides to discover more secrets in Sumeru.