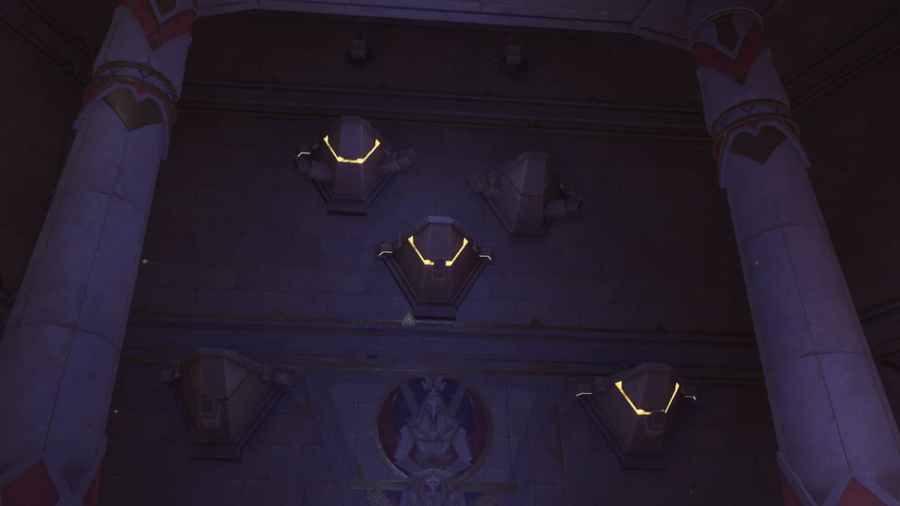 If you're exploring through the Desert of Hadramaveth region in Genshin Impact, you may come across Cascade puzzles in the ruins. Your objective (with one exception) is to fill all of the cascade pools completely in each puzzle. If you solve all seven puzzles, you'll be granted plenty of treasure and even a hidden achievement. Here's where to find all the Cascade Pool puzzles and how to solve them.

The Ancient Orchard and Spring Hidden Achievement is awarded for solving seven Cascade Pool puzzles around the Tanit Camp, Safhe Shatranj, and Wadi Al-Majuj areas. You can refer to the map above for the locations of all seven puzzles. The last puzzle comes with three parts, as well as enemies! It will reward you with a Luxurious Chest at the end.

To solve Cascade Pool puzzles, you'll need to use an archer to fire an arrow at the spouts at the top of the puzzle and on the bottom or sides of each pool. If a spout is lit up with blue light, it is open, and it will let sand pass through. If a spout is dark, it's closed.

How to solve the first Cascade Pool puzzle

The first Cascade pool puzzle can be found nearby the pool at the bottom of the Tanit Camps. Make sure that the spout on the bottom of the pool is dark, so the pool will fill, then fire an arrow at the top spout to turn the sand on and fill the pool.

How to solve the second Cascade Pool puzzle

The second puzzle will only become accessible after exploring the first tomb in the Dirge of Bilqis World Quest. You'll need to go to the ground level of the canyon that is revealed after clearing the sand in the area, then look up. This Cascade puzzle has three pools you'll need to fill. Start with the spouts of the top two pools open, and the bottom closed. Fire an arrow at the top spout to start the sand flowing. When it has filled the bottom pool, shut off the spout of the middle pool to fill it, then the top pool. If you don't fill all of the three pools before the sand turns off, don't worry. You can strike the top spout again to restart the sand.

How to solve the third Cascade Pool puzzle

This third puzzle is located nearby an enemy camp. Start with the bottom pool's spout turned off, and the spout pointing toward it from the top pools turned on. Hit either top spout to start sand flowing until the bottom pool is filled, then turn all the top pool spouts off to fill them.

How to solve the fourth Cascade Pool puzzle

You thankfully won't need to get more than one angle to complete this Cascade puzzle. Fill the pool on the right by turning of the pool's spout, and turning on the top spout above it. The pools on the left can be filled similarly, just remember to fill the bottom pool first, then shut off the spout on the top pool.

How to solve the fifth Cascade Pool puzzle

Related: How to solve all puzzles in The Temple Where Sand Flows Like Tears World Quest in Genshin Impact

How to solve the sixth Cascade Pool puzzle

The sixth puzzle is a a bit further into the canyon, again on the left hand side coming from the south east corner. Open the left top pool valve, the right middle pool valve, and shut the bottom pool valve, then close the open valves once the pool beneath it is full.

How to solve the seventh Cascade Pool puzzle

The final Cascade Pool puzzle breaks the norm. It's located inside the ruin in the north west corner of the Safhe Shatranj ruins. Take the elevator in the back of the room down to reach the puzzle. This puzzle does not want you to fill all of the pools. Instead, you'll need to fill the pools on the left hand wall three times according to the pattern displayed on the opposite wall on your right. To trip you up further, the game decided to invert the guide you're supposed be going by.

Between each pattern you'll need to fight a few enemies, such as Eremites and Ruin Drakes. After completing all three patterns you'll be rewarded with a Luxurious Chest. And, if you've now solved all of the Cascade puzzles, you'll unlock the hidden achievement.

How to solve all Cascade puzzles in Genshin Impact