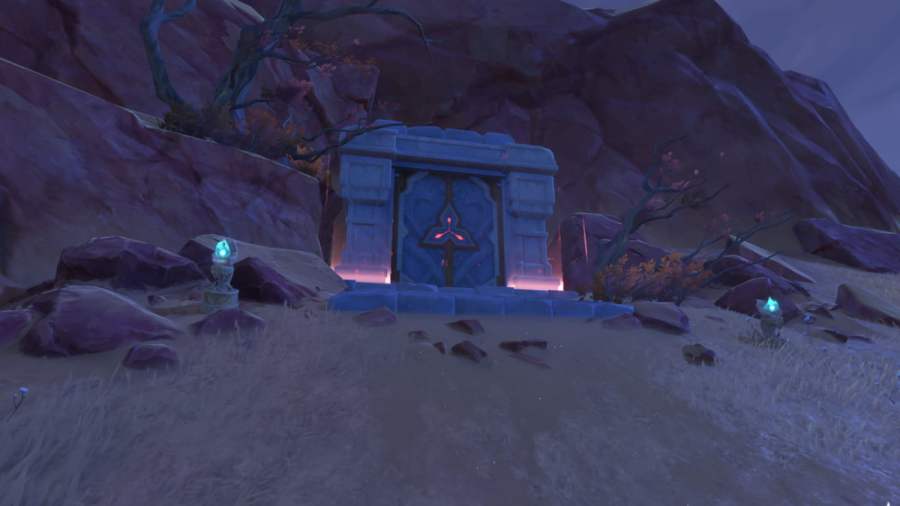 The Fane of Panjvahe is a Genshin Impact Domain located north of the Desert of Hadramaveth. To unlock it, you need to guide two Seelies to their respective Courts and solve a puzzle along the way. The Fane of Panjvahe is not a farming Domain, but once unlocked, it can serve as a convenient Waypoint to help your desert exploration.

You need to solve two puzzles to guide Seelies to their Courts, which is a requirement for unlocking the Fane of Panjvahe Domain. You can do them in any order.

Head to the Teleport Waypoint east of The Sands of Three Canals. From there, go to the area circled in the image above to find a Seelie beside a Ruin Drake: Skywatch. You must defeat the Ruin Drake, as the Seelie won't move if you don't. Once that's done, follow the Seelie to its Court beside the Fane of Panjvahe Domain.

Related: Genshin Impact Wisdom Has Built Her House, She Has Hewn Out Her Seven Pillars World Quest guide – The Dirge of Bilqis

You'll find a Seelie floating around three sets of Weathered Obelisks to the left of Fane of Panjvahe Domain. These are stones with runes on them. Your goal is to ensure the symbol of the Obelisk at the front match the symbol at the back. You can change the symbol by attacking it with a Normal Attack, and you may have to attack a few times before the correct symbol shows up.

The tricky part is that the Seelie will change the symbol when it passes by an Obelisk. So to solve this puzzle, you need to time your attacks properly.

Focus on one set of Obelisks first—any of the three will do. Wait until the Seelie has passed (evident by the symbol changing), and then immediately start attacking the rune in front until the symbol matches the one at the back. You must do this as quickly as possible. When you're done, immediately turn your attention to the next set of Obelisks, wait for the Seelie to pass, and then attack until the symbols match. Do this for all three sets to solve the puzzle.

You can start from any set of Obelisks, but you need to follow the same path as the Seelie so that your moves are timed correctly. If the Seelie lands on an Obelisk that you have already matched, the symbol will change again. When you successfully solve this puzzle, the Seelie will guide you to its Court beside the Fane of Panjvahe Domain.

Once both Seelies have been led to their Courts, the Domain will unlock. Don't forget to interact with it once so that it becomes a Waypoint that you can teleport to at any time.

To unlock another desert Domain, check out our guide on How to unlock the City of the Deceased Domain in Genshin Impact here on Pro Game Guides.

How to unlock the Fane of Panjvahe Domain in Genshin Impact