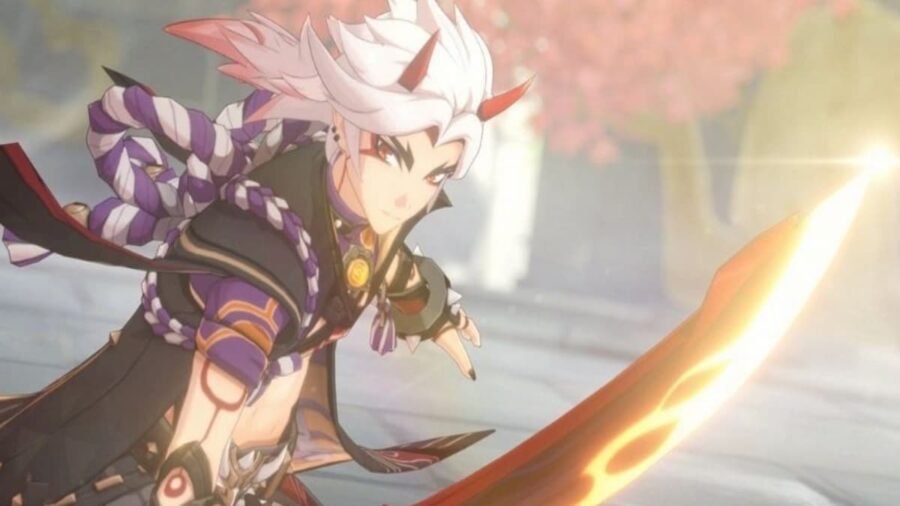 Befitting of someone with the title of gang leader, Arataki Itto boasts a great amount of strength on the battlefield, acting as the main damage-dealer for the party. Because of his abilities, Itto is also a bit more versatile than he may initially seem. Here are three ways to play Arataki Itto as a Main Damage-Per-Second character.

Wielding a claymore and the Geo element, Arataki Itto's passive ability allows his Attack to be increased by a percentage of his Defense. His Critical Rate will increase with leveling. While using his Elemental Burst, Itto's attacks are all overridden with the Geo element, causing Geo Damage. Because of all this, players will want Itto's equipped artifacts to have the following Main Stat effects:

The desired sub-stat effects for Arataki Itto's artifacts will depend on the type of build that players are going for, but Defense stats will always benefit Itto.

Related: Who is Arataki Itto in Genshin Impact?

The Sturdy Oni King build goes all-in on maximizing Arataki Itto's Defense, which in turn increases his Attack when using Arataki Kesagiri or his Elemental Burst. This increase in Defense will also help with Itto's survivability in battle.

Players will want to get their hands on a four-piece Husk Of Opulent Dreams artifact set and Itto's signature weapon, the Redhorn Stonethresher, which provide the following benefits:

For this artifact set, players should focus on Defense Percentage and Attack Percentage as the sub-stats. With the max amount of stacks built up, the base benefits provided by this artifact and weapon combo will increase Itto's Defense by 74 percent and Geo Damage by 24 percent.

This build won't be relying much on Itto's Elemental Skill since it's focused on slashing away, so it benefits from a team capable of creating elemental reactions or coordinated attacks. An example would be:

Gorou will raise the team's Defense, while Raiden Ei's Elemental Skill and Xingqiu's Elemental Burst will attack alongside Itto, mixing and applying the Electro-Charged Elemental Reaction to opponents.

The Energetic Oni King focuses on building up Energy Recharge, increasing the rate of Elemental Particle collection and allowing Arataki Itto to use his Elemental Burst more frequently. Players should still invest in Defense, though, as this will increase Itto's Attack while using his Burst.

The best artifacts for this build are the two-piece Husk Of Opulent Dreams and two-piece Emblem Of Severed Fates sets, along with the Favonius Greatsword as the chosen weapon. They provide the following benefits:

Energetic Oni King will see players using Arataki Itto's Elemental Skill more often than Sturdy Oni King, but Itto will still benefit greatly from a team that generates Elemental Particles. Like Sturdy Oni King, though, Gorou and Xingqiu fit his team well. An example would be:

Gorou plays the same role in this team: raising the team's Defense. Xinqiu's Elemental Burst will attack alongside Itto and apply the Wet status to opponents, while Kaeya's Elemental Skill will apply the Frozen status to Wet opponents and generate Elemental Particles for Itto.

Related: How to farm Riftborn Regalia in Genshin Impact

The Healthy Oni King build focuses on raising Arataki Itto's Health, increasing the duration of Itto's Elemental Skill. This allows Ushi to remain on the field for a longer period of time, granting Itto more Superlative Stacks and providing a distraction for opponents. Defense remains important here, as it will increase the Attack of Itto's Arataki Kesagiri slashes.

The artifacts that fit Healthy Oni King best are the two-piece Husk Of Opulent Dreams and two-piece Tenacity Of The Millelith sets, and The Bell as Itto's weapon of choice. They provide the following benefits:

Players should invest in Defense Percentage and Health Percentage as the main artifact sub-stats for this build. With a shield active, the base benefits provided by this artifact and weapon combo will increase Itto's Defense by 30 percent, Health by 20 percent, and Damage by 12 percent overall.

Arataki Itto's Elemental Skill will be heavily relied upon with the Healthy Oni King build. Ushi will draw in opponents while granting Itto Superlative Stacks, allowing Itto to use continuous Arataki Kesagiri slashes more often. As such, this build benefits from a team that can create shields and help Itto's Damage output. An example would be:

Remember: as long as you invest at least a little into Arataki Itto's Defense, there isn't a wrong way to build him. The builds listed above are meant to be helpful suggestions, so don't be afraid to experiment with different ideas. Use Itto in a way that works for you and how you want to play Genshin Impact. No matter how you choose to build him, playing as Arataki Itto is sure to be a smash!

Looking for more great Genshin Impact content? Check out Archaic Petra Artifact Set: Stats, how to get, and who can use it in Genshin Impact on Pro Game Guides.