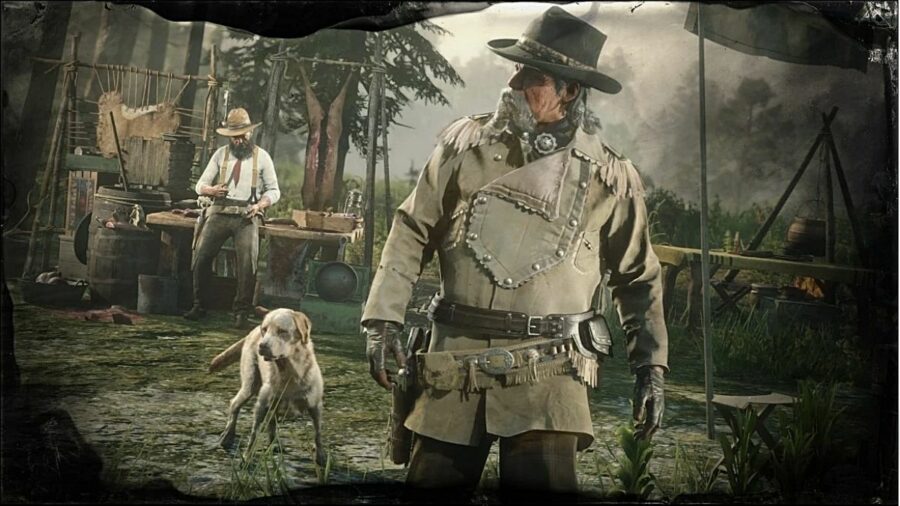 In Red Dead Online the trader role takes advantage of all the hunting capabilities in the game, allowing you to procure fur and sell it along with other animal parts. It does a really good job at being realistic but can be quite time consuming. If you love the hunting, then here is how to be a trader in Red Dead Online.

Cripps Trading Co. is the culmination of you (the player) and your friend from camp, Cripps, starting a trading business. Hunting and deliveries are the focal point of these missions, so if you want to take a break from the wild life of being an outlaw - this is a way to make some money and take a breather.

What Does it Take to Become a Trader?

You will first need to have a Camp set up before you can start the trading side of things. Once you have your camp, in order to get things rolling you will have to collect a Letter from Cripps. You can get this from either a Post Office or by going to your Camp Lockbox (hence the camp). After this you will be able to follow a marker to a General Store to progress. It is at a specific store however and can vary, so you might have to look around a bit first.

After you have arrived at the marker you will be met by Cripps and a slightly off put store employee in the general. There will be a 15 Gold Fee for starting up the union, so that Cripps can buy a Butcher’s Table and turn animal hide etc. into saleable goods. If you don't have 15 gold at the time you will have to acquire the table from the camp store instead.

Related: How to find Madam Nazar in Red Dead Online

What Do You Actually Do?

Basically you will provide Cripps with animal parts so that he can make them into items you can sell. If you manage to fill one Bar of Supplies, this will only contribute to a quarter of your Goods Bar - which ideally needs to be full. In this case you can either take on a side mission to restock goods, or sing to the sum of $20 (pay) to restock that way. OR, it is Red Dead Online after all, you could steal supplies as it does not make your honor go down strangely enough.

The role includes a lot of hunting animals so that you can give them to Cripps to work on. It will then be your job to transport the goods via horseback, and deliver them to the customer. More often than not there will be bandits trying to ambush you along your way, so make sure that you are up-to-date on ammo stock as well so you can deal with them.

What Do You Unlock by Being a Trader?

Dogs. There are other things but most importantly it affords you the chance to get a trusty canine. Other things that do happen to be included are as such: a stew pot for camp, a regular, never-ending supply of food that’ll help to sustain and restore the health cores of you and your crew, and there are vehicles as well.

You will be able to obtain medium and large Trading Wagons for better stock, as well as a Hunting Wagon which will enable you to carry five large carcasses at once (we love the horse but it can only take so much!)

What are the Perils of Being a Trader?

Just as you are an outlaw in West Elizabeth, there are other Online Players trying to do the same things. They can and will, most likely, try to steal your goods - or shoot at items such as pelts to decrease their value.

The best way to try and avoid this is to set up camp in a remote place which is off of the main roads, this way you can avoid being detected. But watch out when pursuing actual deliveries as alternate routes may not always be the easiest to traverse.

Sometimes you will bag carcasses that will be good money when donated to Cripps, and these will usually be stored on your Hunting Wagon which is why setting up camp on a location away from prying eyes is a must. Otherwise you could go on another hunt, only the return and find your spoils have been taken!

What is the Best Way to Get Money?

Deliveries are the name and aim of the game. You can either embark on local ones or more distant ones. Doing lots of local ones will allow you to bring your revenue up, but not with any great speed. Taking on more distant deliveries, however, will gain you an extra $17 per mission - meaning there is more to earn if you go further afield.

You will incur more rival players coming to steal your loot the further you go though, and it can be quite time consuming, so your method will be up to you.

As with any side hustle in Rockstar games you will need to Level Up. The more you increase your rank, the more money you will get for deliveries. The medium and large wagons mentioned from before will help in terms of volume for this as well, so they are worth having. In this case quantity of stock increases quantity of money, and selling in bulk is a good way of getting more moolah (even though usually that would give people discount). So, get on your horse and ride!

What is the Best Way to Earn Experience?

There are some milestones to aim for to get the best XP out of your trading co. Delivery and resupply missions will help you to start earning a fair amount of XP, as well as donating the goodies from your hunt to Cripps. In order to make it a thriving business you will be donating to him a lot, so even small amounts of XP will accumulate to something decent.

The milestones previously mentioned are at rank five and rank ten. This is because if you complete the Daily Trader Challenges you can earn extra XP alongside your regular missions. When you get to rank five you get thrown the extra bone of an additional trader challenge, and then a third challenge when you hit rank ten.

Additionally, these give you Gold, 200 General XP as well as 200 Bounty XP which is very handy, So basically, just undertake normal missions, trader challenges and focus on hunting for Cripps and it shouldn't take you too long to get a decent amount of experience.

These points should be a good starting point for your adventures with the Cripps Trading Co. Always be ready for other players trying to muscle in on your territory and make sure to do the daily challenges. If you stick with these rules you should be a trading mogul in no time!

Need help with other missions? Why not check out the best moonshine shack locations in Red Dead Online?

How to find Madam Nazar in Red Dead Online