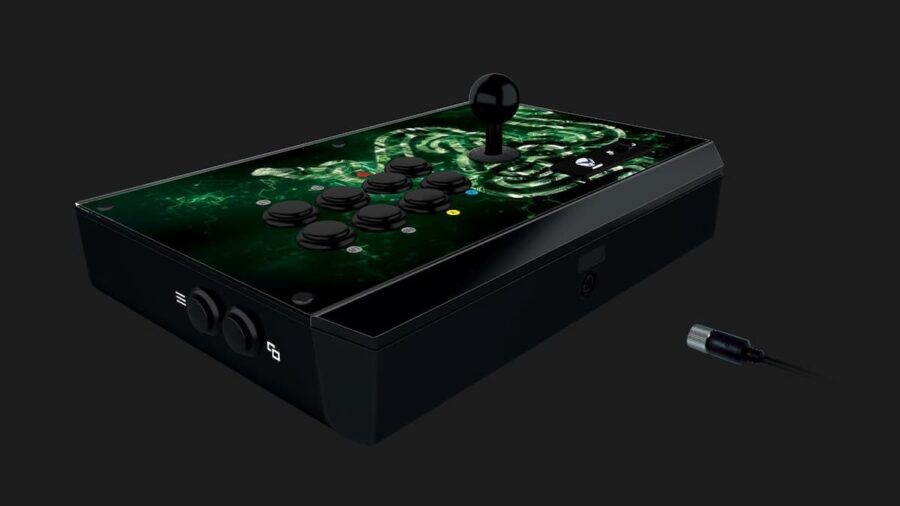 When it comes to competition, no genre is more competitive than the fighting genre. These games pit one player against another in a series of matches where they will have to analyze their opponent's fighting style and habits as they play. For that reason, any amount of latency can cause a dropped combo or a missed input. To prevent this, fighting game players almost always prefer a wired controller and there is no better-wired controller for fighting games than a fight stick. These controllers emulate arcade machines controls which is where the fighting game genre was born. Having all the buttons within easy reach and the fighting stick allowing for more precise inputs has led to a rise in popularity for this type of controller. Below you can find some of the best picks out there for fight sticks.

Officially licensed by SIEA, this fight stick is compatible with PlayStation and PC. It features tournament-grade original HORI parts including a HAYABUSA joystick and buttons. The Hori Real Arcade Pro N Hyabusa fight stick has a sleek design with gold trims as well as a Noir button layout that is popular in Japan. While it does not have a tournament mode, it does feature turbo functions. It also has a touch panel that is fully compatible with PlayStation, button assignment, and an options button compartment as well as a headphone port. It has a large base intended to offer comfort and helps those with large hands. The Hori Real Arcade Pro N Hyabusa can be customized, but as the faceplate is bolted to the base, it is not as easy as other fight sticks. This fight stick is available for $169.99 making it fairly priced for those just getting started with the FGC.

The Mayflash F500 Elite is one of the most versatile fight sticks as it is compatible with Xbox, PlayStation, Nintendo Switch, PC, Android, NEOGEO mini, and SEGA GENESIS. For $149.99 it is also a great budget option for first-time fighting game players and those strapped for cash. IT features premium Sanwa components, nine highly responsive buttons, and a precision four-way joystick. Like most fight sticks, the Mayflash F500 Elite is also fully customizable and allows the player to replace the buttons, faceplate, and joystick. One thing that is unique to this fight stick is the headset port that allows you to block out background noise and stay focused. The Mayflash F500 Elite does not feature a tournament mode, only turbo, so you should be careful not to misclick during a game. When traveling, the USB cable can be safely stored in a built-in compartment on the side of the fight stick.

Playstation players will be delighted with the Qanba Drone as it is compatible with Playstation as well as PC and is officially Sony licensed. Where this fight stick truly shines is its cost. Normally fight sticks cost well upward of $100, but the Qanba Drone will only set you back $80. This makes it the perfect choice for those on a budget and those just looking to get into the FGC. While the Qanba Drone opts to use Qanba's buttons and joystick, like most fight sticks this one is customizable. This means players can opt to replace the buttons and joystick with their own should they wish to. It features a flashy design and anti-slip pads on the bottom to stay put. It also has a tournament mode that will prevent misclicks. Lastly, the Qanba Drone was built for traveling as it is lightweight yet durable, and has a dedicated slot for the USB connection cord.

Once again Razer makes another list of gaming hardware and this time they have brought the Razer Atrox. This fight stick was designed specifically for Xbox but is still compatible with PC. It features eight highly responsive buttons and a precision eight-way joystick for precise movements. Modding enthusiasts will enjoy the Razer Atrox as it has an easily accessible inner platform for modding. The top plate can also be switched out for personal designs as well as the joystick and buttons. Inside the fight stick, are dedicated slots for the cable, a bot top joystick, screwdriver, and space for extra buttons. This makes traveling to tournaments or a friend's house much easier. It also features a tournament gaming mode that will deactivate the start, back, and Xbox guide buttons to prevent any misclicks. The Razer Atrox is available for $199.99.

The Victrix Pro FS is a high-performance arcade fight stick that was specifically designed for Esports and competitors. Victrix used feedback from FGC champions and veterans to create this device. They specifically targeted delivering the fastest response time as it could mean the difference between winning and losing. This is achieved by a combination of Sanwa Denshi switches and JLF. The Victrix Pro FS is also quite comfortable due to the angle of wrist slope as well as the non-slip pads so that gamers can play for long matches. It does this while looking good as it is crafted with aircraft-grade aluminum which gives it an ergonomic shape and sleek look. It also features recessed lights that will not distract you while you play. But no matter how good a fight stick is, pros will want to customize it to match their specific needs and the Victrix Pro FS gives the player full customization. The Victrix Pro FS gives the player the ability to update, swap, and add eccentric mods through an easy-to-open door. In addition to this, the buttons, audio, and lighting settings are fully programmable. The Victrix Pro FS is available for $349.99 which can be pricey compared to other options.

When it comes to fighting games, both you and your equipment need to be in top shape. A fight stick will give you the lowest latency and input delay so you can block and do combos at maximum efficiency. Knowing which fight stick is perfect for you can be difficult as there is a lot to consider. We would recommend the Mayflash F500 Elite as it has so many features for a great price. Those who don't have a budget or simply want the best out there will find the Victrix Pro FS to be a great fight stick.