Our Saviors of Uldum Quest Shaman Deck Guide takes a look at the best deck list for this newly popularized archetype. Quest Shaman didn't get much play in the past, but this new version is one of the more powerful options to take to the ladder in the early stages of the new meta.

Shaman was another class that didn't get to take much advantage of its previous Quest, but this time it looks like it might be one of the front-runners for most powerful. If what's being predicted by some content creators, this deck could be the standout of the early expansion. That remains to be seen, and we'll see if Shudderwock makes a triumphant return to the meta!

This list has been further revised, and has been updated to reflect the currently best version according to HSReplay.

The Corrupt the Waters quest once completed will give you the hero power, Heart of Vir'naal. It costs 2-mana and reads, "Your Battlecries trigger twice this turn."

This deck is part combo with Shudderwock and part just beatdown our opponent with all of our resources via our hero power. Just about every card we have is a Battlecry, so we should be able to complete the quest relatively quickly.

With the hero power to enable the double battlecries of this deck, there's just so much you can do. You can get a ton of extra resources with your Lackey generation cards, but you can also control the board with cards like Weaponized Wasp who can now do six damage from hand on a minion or to the face.

Bog Slosher give us some ability to bring back some of our more combo based minions like Lifedrinker or a powerful Lackey. We can feed our Shudderwock some more damage by using it on the right cards.

You might find the inclusion of Mutate to be odd, but Former Champ pairs with it very well. It's not a good minion when it's on the board, so hitting it with the evolve effect will very likely get you something better. Mogu Fleshshaper also falls into this camp, it's a high cost card that you shouldn't be paying full mana to play. So, when you do play it, you can bop into another minion, and then immediately Mutate it and get an 8-cost minion!

If you're looking to win the game via Shudderwock, you want to be careful which cards you are playing. Lifedrinker is the key to that combination, because it reliably does damage to the opponent. Cards like Wasp and the Kobold Lackey are randomly targeted and can damage your own minions and face! So, if you're looking for lethal with Shudderwock, you'll need to keep in mind that you could possibly lethal yourself! If you think Shudderwock is your win condition and you're on The Coin, you might want to save it for the late game. You can use your hero power and then coin out the Shudderwock.

Keep in mind that Shudderwock can only repeat a total of 30 battlecries and they are played in random order. This means that if you've played a ton of battlecries in a game, you might not end up hitting the lethal you were expecting.

As I've mentioned, Lackeys are pretty powerful and only cost 1-mana each. There was originally five of them, but Titanic Lackey was added in Saviors of Uldum. 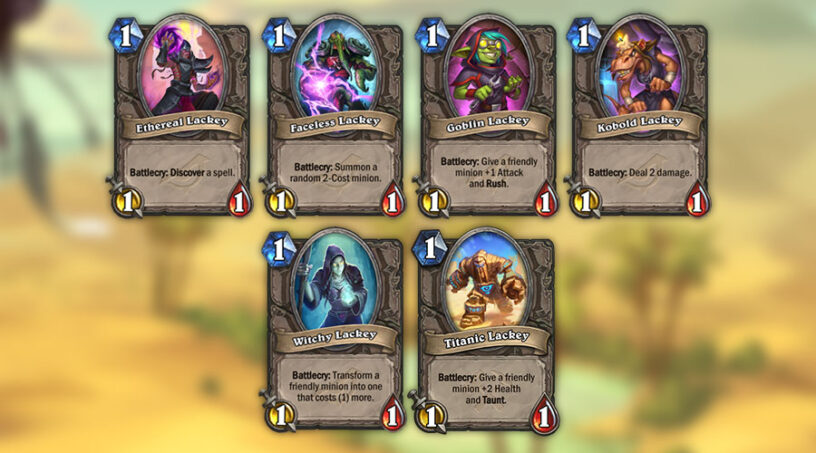 Earlier builds ran more of a combo based deck, so you could consider going that route.