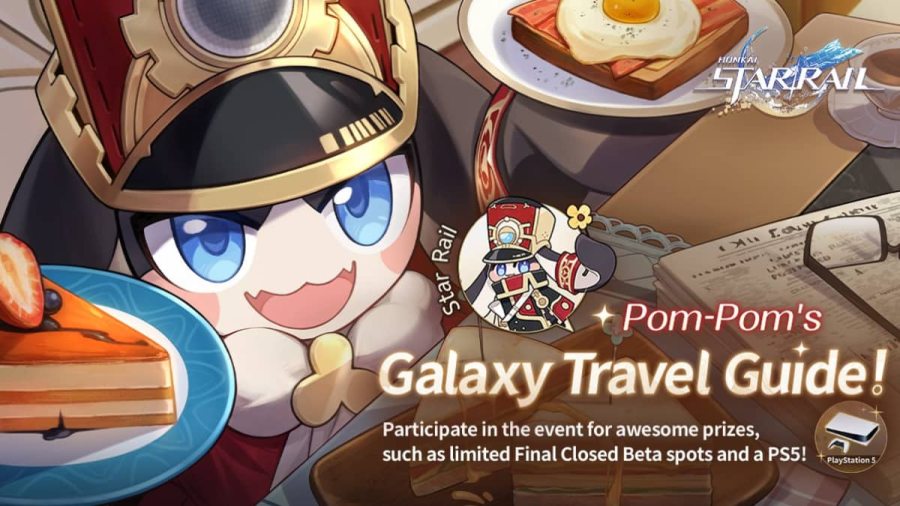 The Honkai: Star Rail Pom-Pom's Galaxy Travel Guide is a web event that commemorates sign-ups for the game's final closed beta test. It runs from January 24, 2023, to February 9, 2023, and offers a chance to win coveted rewards, including a PS5 and a guaranteed final closed beta slot.

Start by heading to the official web event page. Make sure you're logged into your HoYoverse account, which is shared across all the developer's games. Once you create one, you'll be able to use it to log into Honkai: Star Rail upon the game's release.

In Pom-Pom's Galaxy Travel Guide, your goal is to collect Trailblaze EXP, which can be used to draw in from Pom-Pom's Trailblaze Welfare Station gacha.

Click Get warp energy at the bottom of the screen to view the list of daily tasks you can complete. Everything tagged as Daily Mission can be repeated every day, allowing you to farm EXP throughout the web event period. Each task will reward you with x1 Warp. Additionally, you can share your Invitation Code via the Invitation Missions tab. If others play the web event using your code, you'll receive Warps as well.

Warps can be used to obtain Trailblaze EXP. Click on the Warp... Go! button on the home page to get x100 Trailblaze EXP in return. After collecting at least x500 EXP, you can participate in the Welfare gacha.

Related: How to pre-register for Honkai Star Rail

Click on the icon of Pom-Pom to open the Welfare gacha page. Scroll down to find an actual capsule machine, and click Draw to spend x500 Trailblaze EXP in exchange for a random reward. You're guaranteed to get one of the following each time:

You can also participate in the Lucky Wheel by clicking on the gift box icon every day to win one of the following rewards:

How to get a guaranteed Honkai: Star Rail closed beta slot

Accumulating Trailblaze EXP will help you travel from the Starting Spot to various locations all over Asta. By reaching EXP milestones, you'll eventually land at Herta Space Station, then at Jarilo-VI, and finally at Xianzhou. The first 500 players who manage to land in Xianzhou will receive a guaranteed slot in the Honkai: Star Rail closed beta.

The Trailblaze EXP is cumulative and not based on how much you're holding at the moment. So you can spend your EXP in the gacha without ruining your travel progress.

Get excited about the final closed beta! Check out our Honkai: Star Rail beta first impressions—combat, characters, story, and more from the second closed beta here on Pro Game Guides.