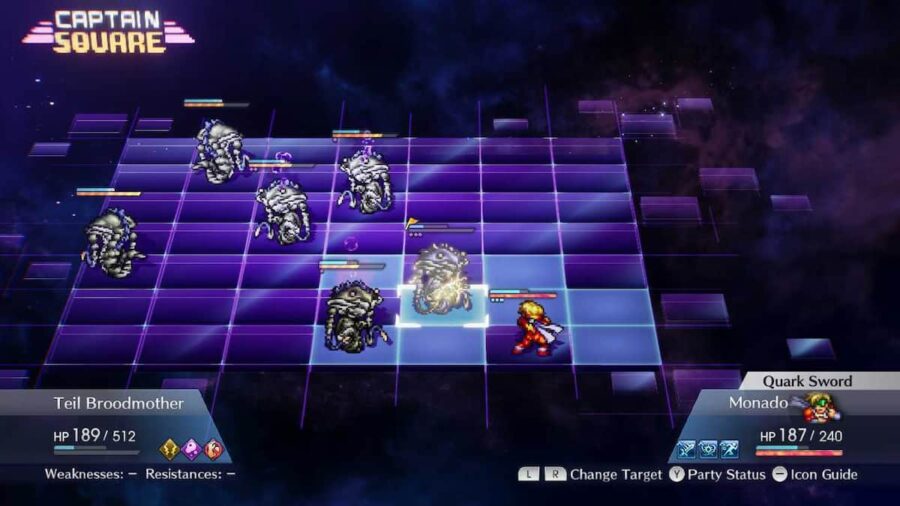 Captain Square is a turn-based tactical RPG minigame in Live A Live’s Distant Future scenario. It has nine stages—one for each planet in the solar system—which have unique enemies you need to defeat. Without a Memory Card, you’re not allowed to save your progress and will be forced back to the Mercury stage when you lose.

While it’s similar to battles in Imperial China, it rewards players who are more patient, less aggressive, and analytical. Here’s how to beat it.

Where to find the Memory Card in Live A Live

If you want to save your game in the middle of playing Captain Square, you’re going to need a Memory Card. The only Memory Card on the ship can be found in Kirk’s room, which you can access later in the story.

How to beat the Captain Square minigame in Live A Live

Below are the moves you’re going to use often in Captain Square:

Each stage needs a different strategy to complete. In this guide, we'll teach you the best way to overcome all of them.

This stage is easy and straightforward. Just fight like you normally would. In fact, we highly recommend using this stage to test out all of Captain Square’s abilities.

Headberts have low HP but they have two very annoying traits: their attacks can sometimes cancel charging attacks and their attack range is three tiles far. The easiest way to beat them is to buff your stats with Plasma Charge and attack with Spacephage.

Related: How to beat Ou Di Wan Lee in the Imperial China Scenario – Live A Live

Get within the one of the right Waterspout’s range of attack (which is three tiles), so it can use its AoE water ability and flood an area. The water will kill the only Firewhirl on the field. Then, Pion Bomb the rest of the Waterspouts.

While the Teils do have an auto-heal skill, the heal comes with debuffs. If you’re lucky, you can even get a free paralysis or poison. The Teil Broodmother’s AI also automatically sacrifices its HP during its turn if the Pups are on the brink of death. As long as you defeat the Teil Broodmother, you’ll clear the stage.

To defeat the Teil Broodmother, copy the position in the screenshot above. Then, use Plasma Charge then a Pion Bomb to cut all the enemies’ HP. This should force them to use those awful healing skills. Finish things off with another Pion Bomb or Spacephage. If you’re at 25% HP, feel free to use another Plasma Charge to restore your stamina.

Cosmotrollers are tricky enemies. They have one devastating lightning attack that targets two parallel horizontal lines. The attack leaves lightning tiles. If you’re on a lightning tile, the tile inflicts moderate damage to Captain Square every time a Cosmotroller that is connected to the lightning tile you’re on takes a turn. If you’re not careful, you could be defeated from passive lightning damage alone.

Not to worry though! It's cheesable. Copy the position in the screenshot above. Use Plasma Charge and then a bunch of Pion Bombs. Move left to nab the other enemies. The Cosmotrollers that reach that second to the bottom row could use their attack, but it’ll be too late by then. After all, they can only move one tile per turn!

Gemparapets have devastating auto-counters, but they’re incredibly weak. Use Plasma Charge and hit them with powerful moves like Pion Bomb and Quark Sword to defeat them as fast as possible. They can’t counter if they’re dead.

Related: How to beat O. Dio in The Wild West Scenario in Live A Live

The trick to winning this stage is to pay attention to the turn gauges of the Pymils. If they’re red (see screenshot above), that means they’re going to use an AoE lightning attack which damages anything within two tiles in all directions. It charges the tiles it hits with lightning. So, much like the Cosmotroller stage, you can be defeated by passive lightning damage if you’re not careful.

How to defeat the Pymil:

Once you’ve defeated most of the Pymils, the El Mirage will start chasing you around. Never move close to it. The El Mirage can defeat Captain Square with one attack. Most of your attacks won’t work on it anyway despite only having four HP.

Instead, use Supernova two tiles away from it. The passive fire damage it will take from the burning title caused by Supernova will be more than enough to kill it. It can only move one tile, so you should be safe until its next turn.

First off, special attacks don’t work on these things, so only use Tachyon Sword and Spinning Star to defeat them. The Lalus have one HP and Lala has two, so they will be defeated in one to two hits.

Much like the Pymil stage, pay attention as to which star is charging up for an attack. This is because their ability, Starburst, is deadly with a three-tile range. You don't want to be hit by it.

Remember that annoying enemy on Venus with a broken range and attacks that can interrupt yours? Pluto has twelve of them that are much stronger. It looks scary but the stage is pretty easy if you don’t overthink it.

Use Plasma Charge and benefit from all the buffs that it gives. Make sure to keep yourself buffed every three turns.