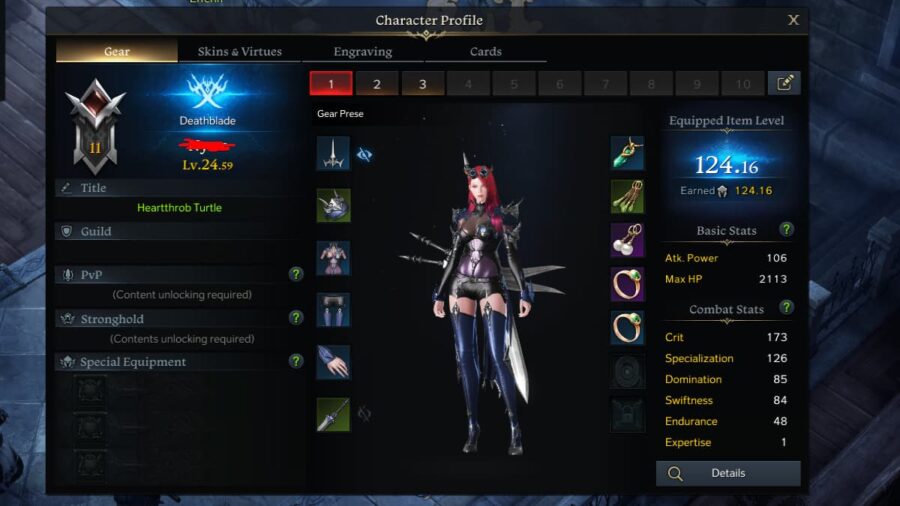 Combat Stats in Lost Ark are an additional number of stats that depend on your class and fighting style. There are six combat stats in total, and each one does something entirely different from the others. The six stats, and what each one means, are as follows:

Crit in Lost Ark refers to the probability of landing a critical hit. It represents the percentage rate at which one of your attacks becomes a critical hit. This does not affect the amount of damage a critical hit does, just the odds of getting one.

Domination in Lost Ark refers to how much extra damage you deal to Staggered, Pushed, or Debuffed enemies. Increasing this will let you quickly defeat disabled enemies.

Swiftness in Lost Ark refers to your character's speed. This includes movement speed, attack speed, and the speed of your class skills' cooldown.

Endurance in Lost Ark refers to your character's health and defense. This enhances your physical and magical defense. It also increases the effectiveness of healing and shields.

Expertise in Lost Ark refers to how your classes' debuffs affect enemies. This increases any debuff's duration and the damage of stagger effects. It also reduces the duration of debuffs that affect your character.

Related: Should you dismantle your equipment or sell it in Lost Ark?

Depending on your class, it entirely depends on what combat stats you want to aim for. If you are a support character, you need to get high Endurance and high Expertise. But for a DPS, Swiftness, and Specialization are a must.

Combat stats come primarily from your armor. In the game's early stages, you can chop and change as you see fit when you get better armor. But in the late game, your combat stats will vastly alter the game's difficulty.

These stats are from our Level 24 Assassin Deathblade, as an example of the percentage gained from having certain points in specific stats:

We get the following for 126 stat points in Specialization:

We have 85 stat points in here, and we get the following:

We have 84 stat points in here, and we get the following:

We have 48 stat points in here, and we get the following:

We have one stat point in here, and we get the following:

All Combat Stats in Lost Ark and what they mean, explained