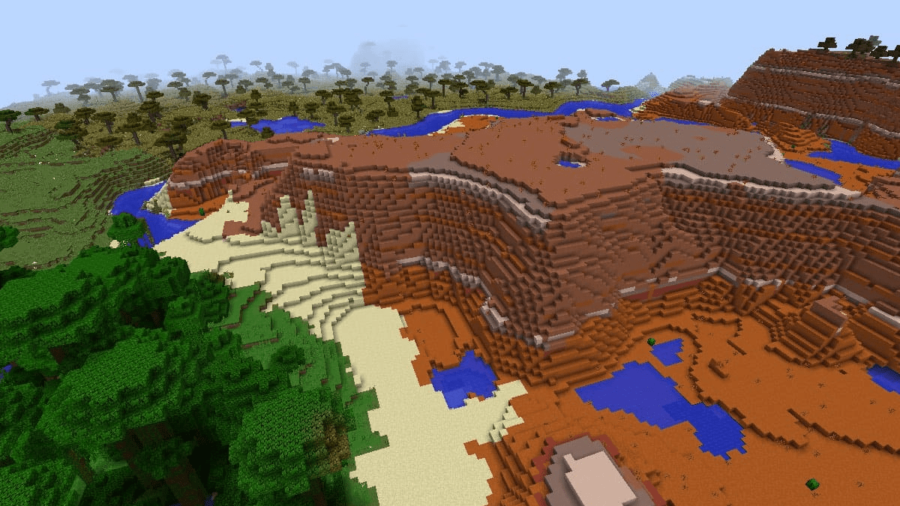 Determining Minecraft's rarest Biomes is tricky business. One must consider what should be considered a real Biome, and what is just an extension of a Biome that already exists. To simplify this, we have provided a short list of the rarest Biomes of two different categories: Normal Biomes and Modified Biomes. To learn the three rarest of each type, read on below!

Before we begin, we'd like to credit Reddit user u/Ecl1psed for his thorough data mining. All the information listed below is thanks to him running almost 37 million tests on world generation. That sounds like quite an accurate way to get the numbers! In order from most common to least common in their respective categories, here are the rarest Minecraft Biomes.

Next on the list is the Mushroom Field Shores. This Biome looks, smells, and sounds like any normal Mushroom Field. The only real difference, and the thing that makes this biome more rare, is that in order to add the Shore to the name, it must naturally generate with a river going through it. Seeing a river generate alongside an ocean isn't common, and seeing it happen in the already rare Mushroom Field is quite unlikely.

The Snowy Taiga Mountains are the rarest on the list of unmodified Biomes, although that fact is up for debate. When using a Biome finder like Chunkbase, you can see this sprout up somewhat often on any seed.  These biomes are often confused with Snowy Taiga Hills, but if you look closely, you'll see that Snowy Taiga Mountains reach greater heights. They're even usually taller than most other Mountain Biomes!

Oddly enough, the Modified Badlands Plateau is rarer than its wooded counterpart. Considering that the Badlands Biomes are known for being low on wood sources, that certainly boggles the mind. This Biome also frequently generates next to Eroded Badlands! Despite its numerous similarities to normal Badlands Plateaus, the Modified version usually has lower elevation.

The Modified Jungle Edge Biome is almost indistinguishable from any normal Jungle Edge. The easiest way to tell them apart is that the Modified Edge generally has more widespread trees, and usually covers a much smaller area. Due to the requirement of some extremely rare world generation conditions, u/Ecl1pse's test showed that this extremely rare biome has only a one in 370,000 chance of being generated on any given world chunk. That is less likely than even some of the highest scratch off lottery ticket winnings.

It'd be foolish to look for every biome on this list without proper tools. If you do come across these when you first populate your Minecraft world, however, perhaps that day might be your best day to hit the casino.

Pro Game Guides has several other articles that might tap in to your adventurous spirit! Be sure to check out Barish's Exploration of the Nether Biomes!

How to Speed Bridge in Minecraft

How to Make and Use a Painting in Minecraft – Painting Door & Custom Painting!