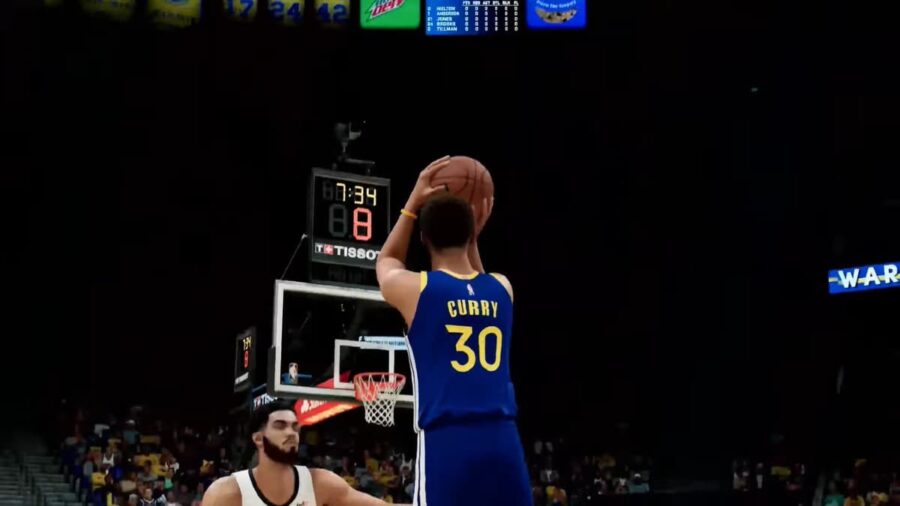 Whether you're looking to emulate a sharpshooter archetype build or get the upper hand from outside against your rival, these are the players with the highest-rated three-point attribute in NBA 2k22.

While he boasts 47 badges (two of them at Hall of Fame level), the build of an Offensive Threat and a 94 overall rating in 2k22, Lillard's three-point rating sits at 87 despite finishing third in the league last season with 275 three-pointers made over 67 games and possessing one of the most deadly three-point shots in the NBA.

Morris Sr (78 overall) certainly won't be your main weapon if you play with the Clippers, but when he's on the floor you'd be smart to utilize his 88 three-point rating on the outside.

At 33 years old, Ingles enjoyed one of his best years of basketball last season, posting a 45.1 percent three-point total and finishing 12th overall in the league with 183 made three-pointers. His 80 overall rating comes equipped with a build of a 2-Way 3PT Facilitator, 15 badges, and a three-point rating of 88.

With a 69 overall rating, Walton Jr is currently listed as a free agent, but if you're looking to upgrade your outside shooting on your favorite team, he may be worth a look as he possesses a build of a 3PT Specialist including a three-point rating of 89.

Durant carries the reputation as one of the league's best players and his overall rating of 96 and build of an Offensive Threat this year will reinforce that. While he might be considered low on this list, his three-point rating of 89, 47 badges (including four Hall of Fame badges), and all-around talent not only make him one of the most threatening options when shooting from outside but one of the best options overall in 2k22.

It might be a surprise to see Seth Curry above players like Kevin Durant and Damian Lillard, but he's coming off a season where he shot 50.7 percent of his three-pointers in 57 games. His overall rating of 77 will most likely see him starting on your bench, but his three-point rating of 90 and build of a Sharpshooter should prompt some attempts from outside.

Despite posting a 40.8 three-point percentage, Robinson finished 4th in the league last season with 250 made three-pointers and is quickly making a name for himself as one of the NBA's premier three-point shooters. His 2k22 overall only sits at 78, but his 90 three-point rating and build of a Shooter makes him one of your best options in the game from outside.

Another player with a lower overall rating of 79, Harris put his skills from outside on display last year with 211 made three-pointers, which earned him a 90 three-point rating in 2k22 with the build of a Shooter.

Known as one of the NBA's top-scoring threats, Thompson has missed the last two seasons with devastating knee injuries but it hasn't affected his ratings in 2k22. The Shooting Guard/Small Forward has the build of a Two-Way Sharpshooter and retains an overall rating of 87, boasting a swollen three-point rating of 95, with 37 badges, including two Hall of Fame shooting badges.

There's little surprise to see one of the best shooters in the history of the game in the top spot. Much like reality, Stephen Curry is almost unstoppable from beyond the arc in 2k22. He is the only player in the game with a maxed-out three-point rating of 99 and holds a stunning 47 offensive badges with four Hall of Fame level shooting badges. If you're looking to dominate on the outside with a three-point juggernaut build, consider emulating Curry's Offensive Threat build; if you're looking to embarrass somebody with a flurry of three-pointers, use Curry and the Golden State Warriors.

For more of the best players and builds in NBA 2k22, check out the Best Rookies in NBA 2K22 and Best Shooting Badges in NBA 2K22.