Swampqueen Hagatha, the new Legendary from the upcoming Rise of Shadows expansion has been officially revealed! It's one of the most interesting cards we've seen so far, it adds a 5/5 Horror to your hand when Hagatha is cast, and it teaches it two Shaman spells! What does that mean exactly? Well, when you play Swampqueen Hagatha, you are given two separate Discovery options (three randomly chosen Shaman spells to choose). Once you pick those both, the Horror is created and put in your hand. You now have a 5-mana cost 5/5 minion that will cast those spells when it is played. Normally, you might be a bit scared that this will be a random effect, but you actually get to target the spells if one of the options requires it!

According to Peter Whalen (Game Designer on Hearthstone), the first spell choice is random, and the second choice won't have a targeted option if your first choice was targeted. Basically, you can only get one targeted option.

If you are still a bit confused, check out the included video below that shows off the card in action. Learn more about the Rise of Shadows expansion with our guide, and see all the cards that have been revealed! 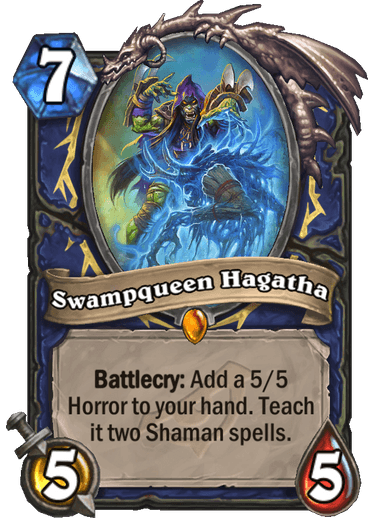