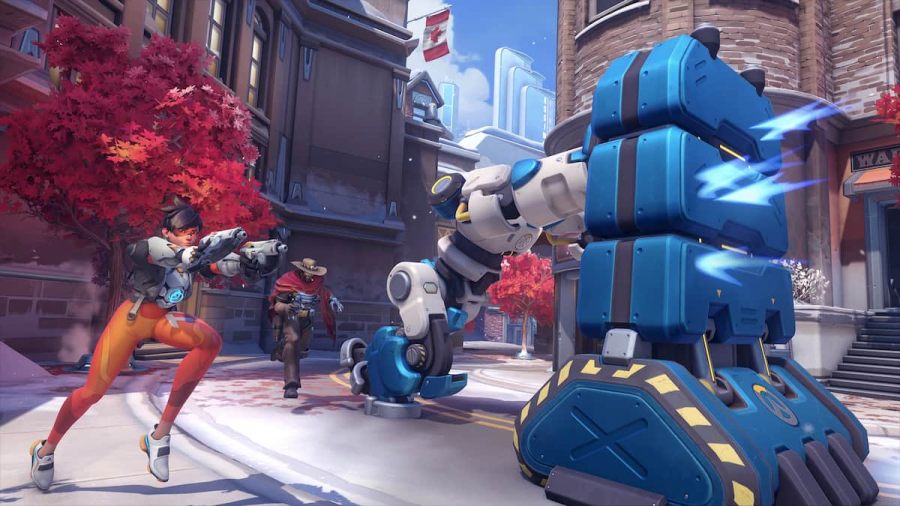 Overwatch 2 adds many innovations including new characters, maps, and game modes. One of the new game modes coming to the game is an objective-based back and forth battle known as Push. Here is everything you need to know about the Push game mode in Overwatch 2.

How to play Push

Push, a unique mode featured in Overwatch 2, is played on a map that is symmetrical. Two teams will battle to control a robot that will push a barrier toward the other side of the map. Each team will have its own respective barriers that need to be pushed. The robot will start at a central point on the map and whoever controls the area around the robot will have their barrier moved. However, either team can control the barrier at any time, creating some back and forth throughout the game. The team that pushes their barrier furthest onto the enemy side wins the game.

What is the best strategy for Push?

The best strategy to employ when attacking is to attack as a team. There is strength in numbers, so trying to take control of the robot without your entire team is a fool's errand. When you are grouped up with your team, all five of you should avoid charging the robot in one big group. This makes it easy for the enemy team to crowd control you and pinpoint your entire team's location. Rather, the best way to attack with your team is from multiple directions at once. Spreading out will cause the enemy team to split their focus and make game-deciding team wipes harder.

That leaves us with defending the robot. To defend the robot effectively, there is really only one strategy to utilize. That strategy is known as the art of spacing. Spreading your team out around the robot will help to ward off the use of AOE Ultimate abilities that could result in easy team wipes. Placement is important, however, there is one other essential tip for when the tables are about to turn. As long as there is one defender remaining near the robot, it will not turn around and head the other way. Contesting the robot for as long as possible can lead to a huge loss of time for the attacking team.

All Push maps in Overwatch 2

Since Push is played on a map that is symmetrical, entirely new maps had to be designed to serve the game mode's needs. Currently, there are only two confirmed Push maps in Overwatch 2, but we expect to see more leading up to and after the official launch of the game. Below are all of the Push maps so far confirmed for Overwatch 2.

This guide will be updated with more maps as they are revealed.

It is also worth noting that just because these maps need to be symmetrical, it does not mean that they are the exact same on both sides. Subtle design changes and lighting keep each side feeling unique without sacrificing the fairness of a layout that is the same.

So there you have it, that is everything that you need to know about the new Push game mode in Overwatch 2. Push is a back and forth battle that could be anyone's game. It will really only come down to which team has the tenacity to control the Robot the longest.

What is the Push game mode in Overwatch 2? How to play, strategy, & more!