Hi-Rez has enabled a test server to try it patches for future updates. You can be a big help to the game if you join up to the server and test all of the new additions! Finding bugs and issues and reporting them will make it easier for them to find them and squash them before they go to the live server.

This is pretty easy, but I've seen a lot of people asking about it. Head to Steam and type in Realm Royale into the search. You'll want to go to the STORE page for the game, and under the Early Access area you will find this: 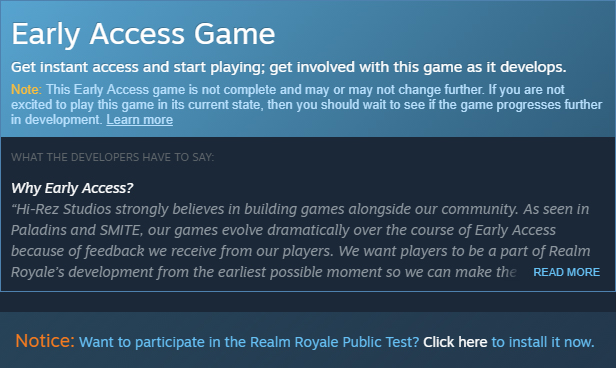 Click the link that says "Click here" and you will be able to install the public test version of Realm Royale. This installs a SEPARATE version of the game, so it won't overwrite your current version and you will need extra space to have it on your drive. This also doesn't carry over any of your rankings, keybindings, or settings! Be sure to fix those before you play.

More changes in Weapon Test 3! Projectile speed was increased and the sizes of the projectiles were changed.

The Test Server is now online! You will find the download link below the Early Access Game description on the Realm Royale Store Page in the orange Notice box. If you have any feedback, be sure to leave it within the designated Early Access 3 Test Server Steam Discussions Feedback Thread.

Realm Royale Ability List – All Abilities for Every Class!