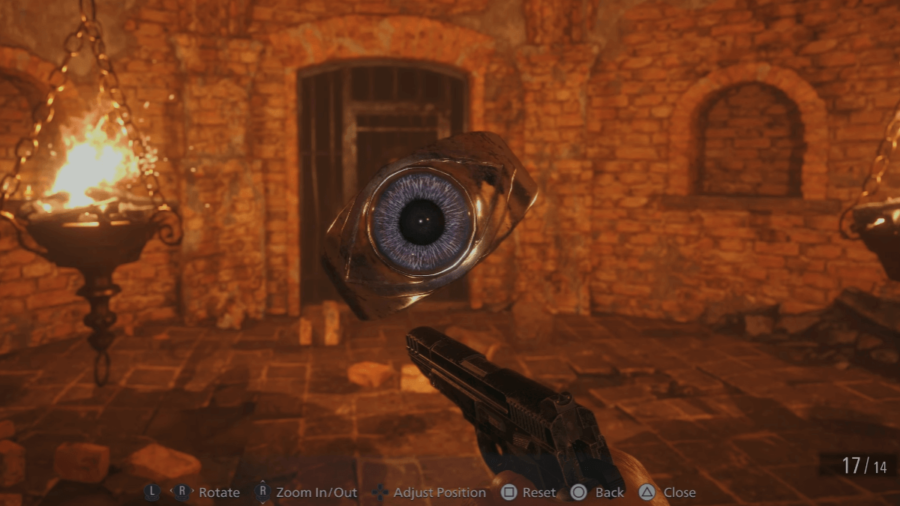 Treasure items have three separate tiers of rarity in Resident Evil Village. Throughout the game, players will pick up Valuable, Very Valuable, and Combinable treasure items. The Azure Eye is one such Combinable Treasure Item, but where do you get it and how do you combine it?

By itself the Azure Eye is valuable, but it can be combined with the Silver Ring to increase its value further. Once combined, you can take it to the Duke to sell for 12,000 lei.

Where to get the Silver Ring

Related: How to survive the lycan attack in Resident Evil Village

Where to get the Azure Eye

Requiring a bit more work, the Azure Eye is hidden in the basement within the Special Chambers. This room is located near the Chamber of Solace, and you've most likely ran past it at this point in the game. The Special Chambers is locked, only to be open with the Iron Insignia Key that is naturally obtained by playing the story.

Within the Special Chambers, note the broken wall in the left corner of the room. Throw a Pipe Bomb at the broken wall to reveal a burning brazier. Light the two unlit braziers by knocking the one into the burning brazier, rinse and repeat. We suggest using Ethan's body to bump the brazier into the fire as opposed to wasting ammo shooting them. If the body trick doesn't work, go ahead and shoot the unlit brazier once or twice. Puzzle completed, open the coffin to retrieve the Azure Eye.

How to combine the Silver Ring and Azure Eye

Open your Inventory and scroll to your Treasure Items. Click on the Azure Eye (or Silver Ring) and choose Combine. A new menu will appear that will allow you to combine both items. Press OK to confirm. If you've never combined two items before, you will be awarded the Repairer Trophy.

With the now-combined Azure Ring, go ahead and take it to the Duke, who will pay a pretty penny for the item.