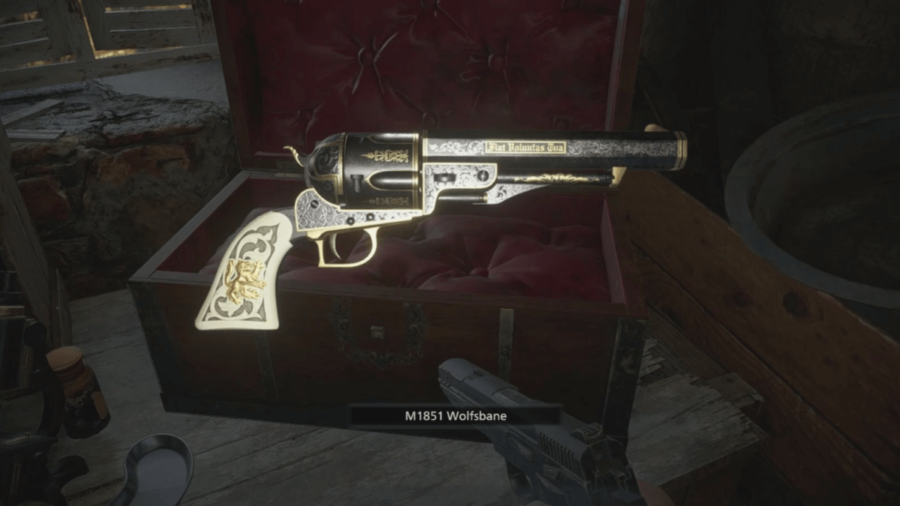 Players must first find the Crank to unlock the gate that prevents players from entering the area where Moreau's Hidden Weapon is located. The Crank is a story-specific item that all players will pick up during a chase sequence with Moreau. This item is impossible to miss, so players should return to the locked gate after defeating the Moreau boss.

After unlocking the gate, players will enter a small closed-off section with three houses. Inside the houses are zombies playing dead, so dispatch them before they cause any harm. There are also flying Samca's in here, which can be easily killed with your sniper or shotgun if they fly in close.

Related: How to get the S.T.A.K.E. Magnum in Resident Evil Village

Moreau's Hidden Weapon is found within the third house, or the farthest hut within this area. The front door is locked, so creep behind the back and crawl through a hole in the wall to enter. A lycan will be inside waiting, so it's best to have the shotgun equipped. The M1851 Wolfsbane rests inside of a small chest.

Not convinced by the M1851 Wolfsbane's powerful stats? Don't worry, because a Varcolac/werewolf waits for you outside! Might as well test out your new revolver and lay waste to the Varcolac. What once required explosives should only take one to two shots with Moreau's Hidden Weapon on Normal.