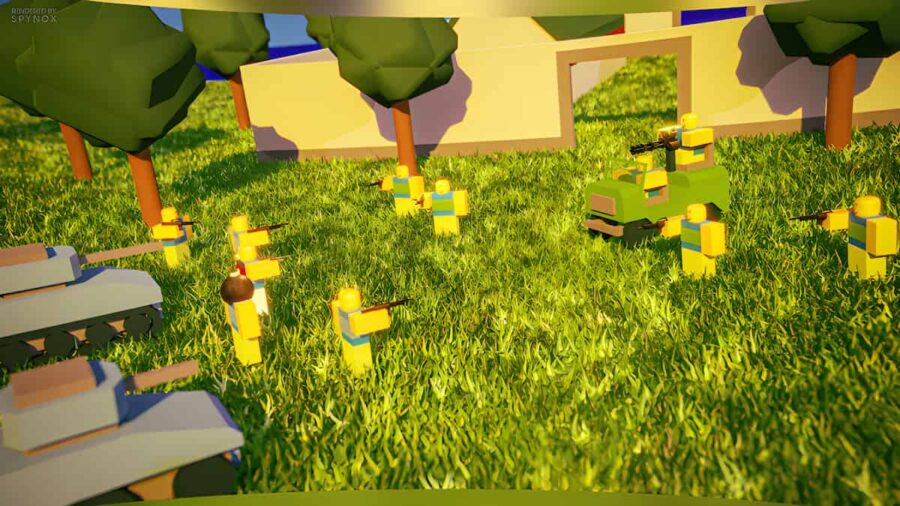 Roblox Noob Army Tycoon is a game all about being a leader. To become the best tycoon, you can be, fund and create a base! Start small by having a few workers who will earn you money, then with the cash you earn, keep buying more—from workers to gunners for your army, vehicles, and more. Afterward, get researchers so you can upgrade your army to become better than ever!

Use our Roblox Noob Army Tycoon codes list to gain more resources to quickly buy upgrades and more units. Our codes will give you Money, Research, and Gems to create new buildings, buy vehicles, aircraft, and much more.

Tycoon games are extremely popular, so why not give these a go? Here's all the code lists we have on Roblox Tycoon games, Bank Tycoon, Burger Tycoon, Office Tycoon, Tower Tycoon, and Star Water Park Tycoon.

Here's a look at all the working Noob Army Tycoon codes.

It's easy to redeem codes for free rewards in Noob Army Tycoon. Just launch the game and press the Twitter button on the right side of the screen. A new window will appear where you can enter each working code into the text box. Press enter to receive your free reward.

If the code is invalid, in the text box 'Code Invalid' will appear. All the rewards you'll get will appear in the box if the code works.

How to get more Noob Army Tycoon codes

The best way to get more codes is to follow the developer of Noob Army Tycoon on Twitter @denetroll, or you can join the Thinking Project Roblox group for a free noob worker and researcher!

Another good place to get codes is to join the official Thinking Project Discord server and bookmark this page and check back often.

Why does my Noob Army Tycoon code say invalid code?

If your Noob Army Tycoon says invalid code, double-check that you have typed the code correctly or have highlighted all the letters if copying and pasting. Inputting the code precisely like it is above is important, or the code will not work.

Another reason why a code will not work is that it has expired. Some codes stop working faster than other codes, so if this happens, let us know in the comments so we can move the code to expired.

What do Noob Army Tycoon codes do?

Noob Army Tycoon codes give you an instant boost in resources you can use instantly. With the additional money, research, and gems, you can buy more workers, and researchers, and upgrade more buildings quickly to get more passive income as fast as possible to expand your Tycoon base even more.

What is Noob Army Tycoon?

Your aim in Noob Army Tycoon is to build an entire base from nothing. Start on a tiny bit of land, purchase some workers to gain money slowly, then use that cash to buy more workers—to upgrade your buildings and more. Eventually, you'll earn enough money to buy army units and researchers to improve these units. You can even start purchasing vehicles and aircraft units and expand your territory!