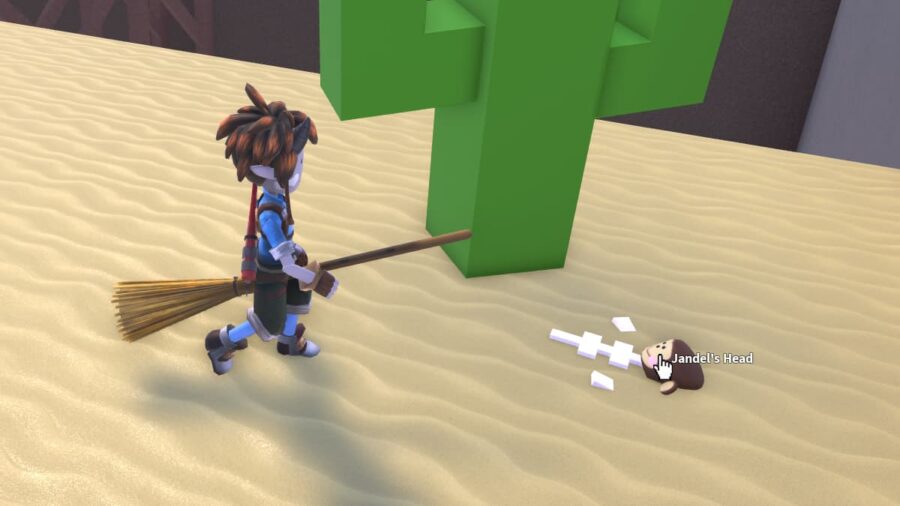 Jandel is one half of the Wacky Wizards development team, and he's got a secret ingredient hidden somewhere in the overworld. It is the Jandel's Head ingredient, and it looks like a cartoon monkey's head. Players can find this secret ingredient behind a cactus, and in front of Glinda the Witch's cave.

To find the Jandel's Head ingredient, head to the desert biome. Once you're in the desert, cross the train tracks bridge to reach the other side of the desert. Then turn left to head toward a cave, which just so happens to be where Glinda the Witch resides.

Just outside of the cave is a cactus and a skeleton partially buried in the sand. Connected to this skeleton is the Jandel's Head ingredient. What happened to Jandel in this wacky world, well, remains to be discovered. But right now your mission is the secret ingredient, so pick up Jandel's Head, teleport to your cauldron, and avoid all thoughts of being a grave robber!

With the Jandel's Head ingredient in hand, players can create lots of secret potions, such as:

But do keep in mind Jandel's Head is a secret ingredient, meaning you can't keep this ingredient on your table forever. Every time you need Jandel's Head, you must travel to Glinda the Witch's cave and pick up the ingredient near the cactus.

How tall is a Roblox character?

How to get the Plane and Helicopter in Roblox Adopt Me