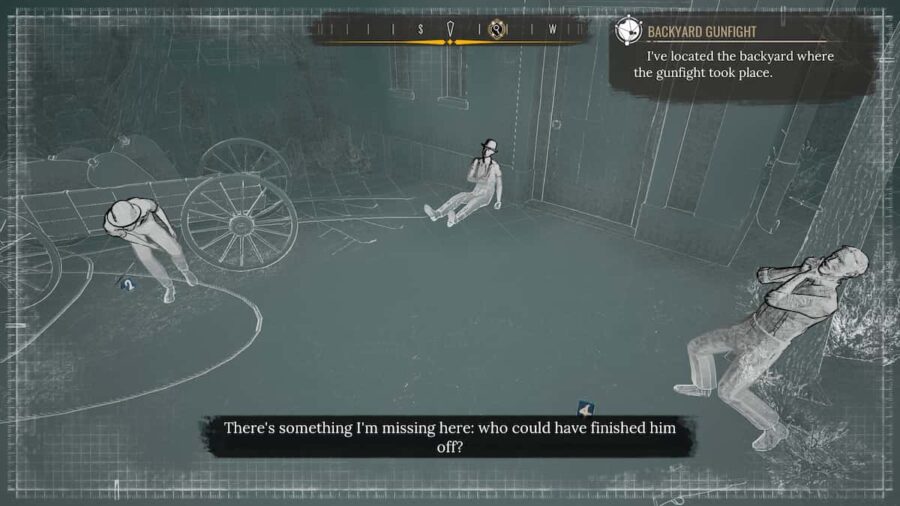 Among your story cases in Sherlock Holmes Chapter One, you can pick up side-cases all over Cordona. Some require you to seek them out; others are easy to find, such as the Police Cases at the Cordona Police Station. To begin the case Splitting the Loot, interact with the board to the left of the front desk at the station.

NOTE: This case will appear on the police board after you've solved the Police Case The Collie Shangles.

Related: How to solve The Collie Shangles Case in Sherlock Holmes Chapter One

Pin the evidence Report No. 18-07 and head to a backyard at the very north of Silverton, about midway down the eastern part of Engineers Ln. You'll find part of a fence that's down and a police officer standing in the yard.

Pin the clue Backyard Gunfight and head to each marker to investigate the clues—be sure to interact with this easy-to-miss knife that's lodged in the tree by the shotgun at evidence marker four (seen below).

After you've interacted with all of the clues, a node will appear in the middle of the backyard, allowing you to begin piecing together the scene. When prompted, arrange the scene as follows:

After Sherlock runs through the events, he will declare that he missed something. Pin the clue The Missing Piece and head to evidence marker three, where you'll find a spot you can use Concentration Mode.

Hover over it in Concentration Mode to get the final piece of the puzzle. Now that you have an answer head back to the Police Station and report your findings to the officer at the front desk to finish this case.

How to solve the Blindsided case in Sherlock Holmes Chapter One