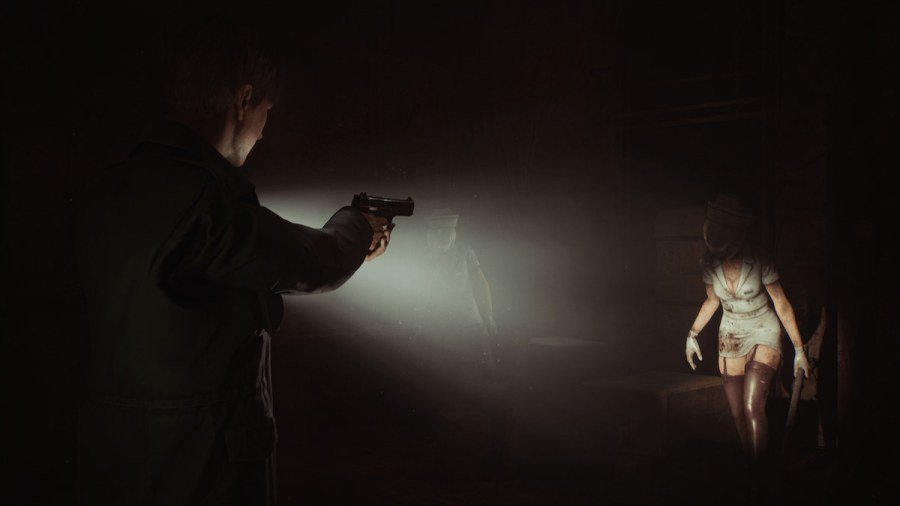 One of the big problems with determining an overarching story in the world of Silent Hill is that almost every game is self-contained. They're deeply personal journeys into the haunting world of psychological horror. There's a lot of debate over what is and what isn't canon, but if someone wants to get the most out of the franchise while experiencing the full story, this is the proper order.

Developed by Climax Action, this game is a prequel that sets out to explain the origins of the eponymous town. Its atmosphere and tone were closely mirrored after 1999 original, as the game is closely tied to it. The game features a truck driver wandering into the nightmarish circumstances that turn Silent Hill into what it is.

The journey of Harry Mason to save his young daughter is the jumping-off point for everything that came after it. This game introduced many important franchise elements, including its unique design aesthetic, weaving narrative, and multiple endings.

The one that started it all. The original Silent Hill has aged weirdly in some parts, but it remains an unquestioned classic and a solid psychological horror experience 23 years later.

The journey of Harry Mason to save his young daughter is the jumping-off point for everything that came after it. This game introduced many important franchise elements, including its unique design aesthetic, weaving narrative, and multiple endings.

Believed by many to be the finest survival horror game of all time, Silent Hill 2 needs no introduction. This title defined the genre for a generation of horror fans. The game stands out among an already incredible series.

James Sunderland heads to Silent Hill searching for his missing wife after he receives a mysterious letter. His trip brings him into conflict with horrific monsters, challenging puzzles, and nightmarish revelations. This sequel builds on the ideas of its predecessor to reach greater heights. Though this is still regularly considered the high point of the series and the genre, there's still a lot of good stuff from here.

Most fans who don't pick Silent Hill 2 as their clear favorite choose this PS2 classic instead. The game stars Heather Mason, fresh from the first entry and now a full-fledged hero in her own right. Heather must return to Silent Hill to discover the secrets of her birth. This game and its immediate predecessor have aged extremely well and received an HD re-release.

Silent Hill 3 is a canonical sequel to the first game, breaking tradition with the anthological format that the franchise uses. Despite that, in-game details explain that Silent Hill 2 comes several years before 3.

The Room is something of a black sheep in the franchise. It departs from the format in many substantial ways. As such, it was a tough find for years. Though this game lacks the pedigree of the first three entries, it's a special journey that stands on its own.

This is the first Silent Hill where no one goes to the eponymous town. The story follows Henry Townshend, who wakes up one morning trapped in his small apartment. When a mysterious hole opens, leading the way to horrific alternate realities, he must fight to discover why he's been locked away. Without much of the iconography of the previous games, The Room claims its own identity.

This is where some contention emerges among the fanbase. Some argue that nothing other than the original four games is canon, but the other games are part of the story. If you don't want to experience the games that people tend to like less, bail out here.

Homecoming is the sixth entry in the franchise. Double Helix developed it, and it wasn't particularly well-received. The game has its fans, but this is where many lose interest. The story follows Alex Shepard, a soldier who comes home from the war to find his family in shambles. He is brought to the eponymous town to search for his missing brother. As the second American Silent Hill, this game focuses more on the franchise's combat elements.

A general fan-favorite regarding Western-developed Silent Hill titles, Downpour is the eighth entry in the franchise. The journey of convict Murphy Pendleton corrects elements of the canon after Homecoming and improves the combat system. After a disastrous crash during a prison transfer, Pendleton winds up wandering the familiar foggy town. Downpour hews closer to action, but plenty of gruesome horror is still on display.

This is where the canon path ends. The last canonical entry in the franchise took place a decade ago. However, there are some more entries.

This Nintendo Wii title is a reimagining of the 1999 original game with various interesting narrative changes. It takes place in an "alternate universe" separate from the canon of the main franchise.

Despite its lack of canonical impact, Shattered Memories is an interesting experience. It uses a series of psychological questionnaires to change the experience for every player. It's a fun, innovative, and easily the best horror game for the Wii.

The PlayStation Vita held this dungeon-crawling spin-off, which doomed it to limited sales. A few lines of dialogue tie this standalone game to the side universe of Shattered Memories. It follows a player-designed character who finds a magical book and battles their way through Silent Hill.

The game's joke ending even has the player's original character interact with earlier Silent Hill protagonists.

A virtual novel retelling of the 1999 classic. This was exclusive to the Game Boy Advance and only available in Japanese. Just play the first game.

For more information on gaming, check out Silent Hill 4: The Room has been rated for PC and Silent Hill Ascension – Release date, Trailer, and Everything we know on Pro Game Guides.

How to play all Silent Hill games in order