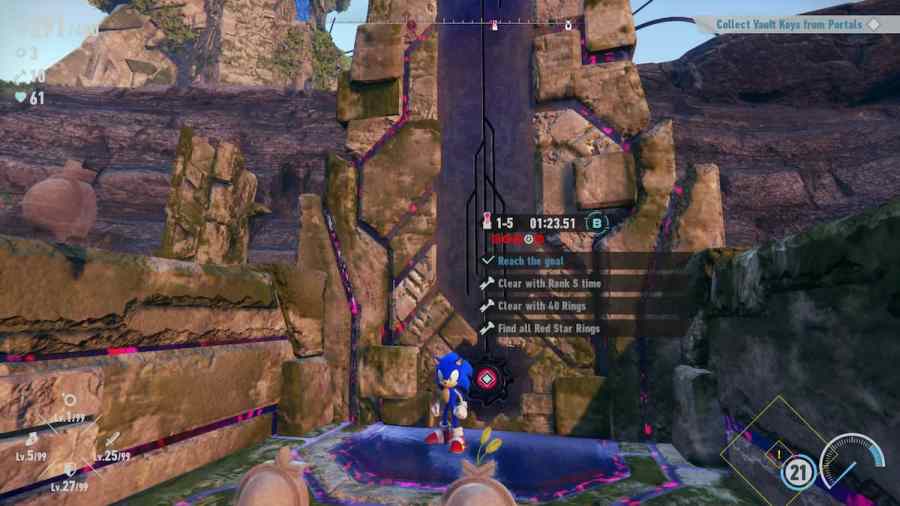 Sonic Frontiers is a new horizon for the Blue Blur but also includes plenty of callbacks to the character's history. To unlock the Chaos Emeralds and face off against the game's new enemies, players must test their skills and earn plenty of Vault Keys.

How to earn Vault Keys in Sonic Frontiers

Vault Keys are a special resource in Sonic Frontiers that can only be earned through the game's Cyberspace Levels. Cyberspace Levels are a break from the open-world design of the main game to put Sonic through a more classic high-speed platforming challenge. Each is based on a stage from an old Sonic Game, like Green Hill Zone or Chemical Plant Zone.

Related: How to fast travel in Sonic Frontiers

You can access cyberspace Levels through Portals, marked on the map by large black icons resembling thrones with red markings. Players can use the in-game map to seek out and remove all other icons to make them easier to find. They take the form of towering thrones.

Players will need Portal Tokens to activate the Cyberspace Levels. These can be gathered by defeating minibosses or swarms of enemies in the open world. Portals will increase in cost as the game goes on.

Once you've unlocked the level, you'll just have to beat it. You'll earn one Vault Key just for completing the Cyberspace Level's gauntlet of challenges, but there's much more to get out of each level.

Each Cyberspace Level features multiple additional challenges that will grant another Vault Key. These include completing the level within the S Rank time, collecting all five Red Rings, and finishing with a certain number of rings. A single Cyberspace Level can grant a skilled player four Vault Keys. There's no penalty for replaying the level to get the best possible time, so just keep at it.

How to get Vault Keys in Sonic Frontiers