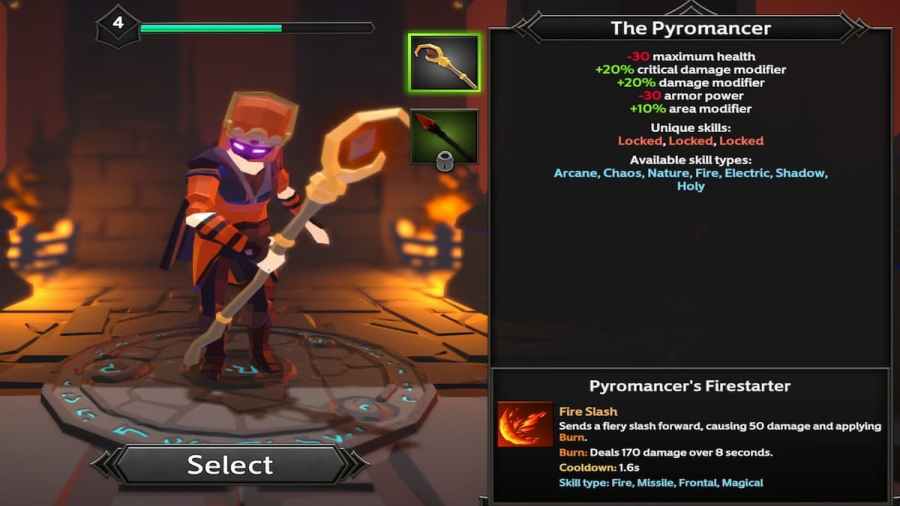 There are many classes to choose from in Soulstone Survivors, each with slight differences and different skill types they can choose between. Those who like to burn their foes with arcane fire and blast enemies with strong magic will like the Pyromancer. This may leave you wondering what the best builds for the Pyromancer are in Soulstone Survivors.

The Pyromancer is a frail character that should stick to blasting enemies from a distance. You should focus on skills that hit in front of you and share the Missile, Blast, and Magical categories. You can get one skill that hits up close as a means of defense, but we prefer simply keeping our distance.

You will want to focus on long-range spells that target in front of you or strike enemies at random, though we recommend selecting some of both. There are various categories, but we found the Missile and Magical as the best ones, as you can power these up together. Getting the Swift and Vicious Strikes passives will also make you more deadly and survive for longer. Here are our recommended best skills for the Pyromancer in Soulstone Survivors.

Arcane Sparks is an incredible spell, especially if you upgrade its area modifier and multicast chance. Following that, Arcane Beam, Light Beam, and Magic Missiles are great multi-hit skills. Finally, Chain Lightning is a great skill that strikes multiple foes and links together damage.

Outside of these choices, the remaining skills in our list are a nice way to round out your offensive. If you prefer to buff your powerful spells, then Arcane Power is a good choice, as it will greatly increase all your skill potency.

The Pyromancer is a squishy damage-dealing class, meaning you will want to increase your damage, particularly critical damage. As you are pretty frail, it isn't worth increasing your defense or health too much; instead, focus on movement or damage. Here are the best stats for the Pyromancer in Soulstone Survivors.

We recommend focusing on Critical Chance, Critical Damage Modifier, Multicast Chance, and Cast Frequency. These will let your spells hit harder and more often. Many of the recommended skills above become increasingly more powerful if you can multicast them, especially if the area size has been increased.

We recommend sticking with the starting weapon, Pyromancer's Firestarter, to start each run with the Fire Slash ability. This is a low-damage and fast cast frequency skill that can apply the burn effect and hit enemies in front of you, even passing through multiple.

The second weapon for the Pyromancer, Firelord's Ire, is not worth it due to its ability, Combustion. This is due to the short range it has, meaning you will need to get close to enemies, which is not good for the squishy Pyromancer. Still, it can provide a defense against enemies that rush you down.