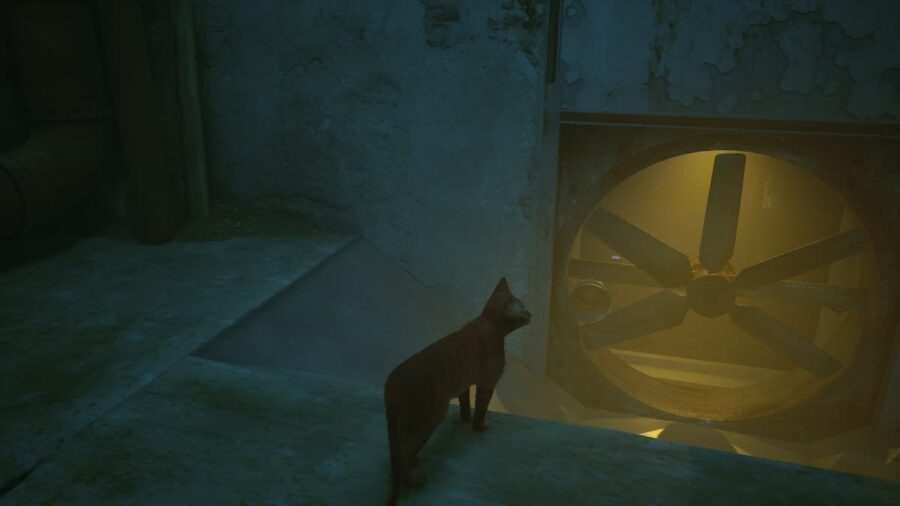 Enjoy feline fun in Stray—where you play as a lost cat that attempts to reunite with its family. As you explore the ruins of a cybercity, you will encounter various challenges and dangers. A pair of spinning fans is one of the first challenges you will encounter in the Dead City. This may leave you wondering how to get past the fans in Stray's Dead City.

How to stop the fans in the Dead City in Stray

To get past the fans, you must stop the blades spinning or risk becoming a chopped-up cat. Fortunately, you can use your feline senses to stop the fans and sneak past them. Here is how to stop both fans in the Dead City in Stray.

Related: How long does Stray take to beat?

How to stop the first fan in Stray

The first fan you approach is found on a ledge above you. If you have climbed up, you will need to jump back down. Scattered around this area are four buckets. You might initially think you need to place them under the dripping water and fill them up, but you actually need to carry a bucket up to the fan. Drop it in the slopped area, and the bucket will fall into the fan, stopping the blades from spinning.

How to stop the second fan in Stray

You will come across the second fan further in the Dead City shortly after the chase sequence. This fan is hooked up to a power source, and there are no grabbable objects in sight. So instead, follow the powerline to the left of the fan and remove the power source from the wall. This will stop the fan from spinning and let you cross.

For more information on Stray, check out the next puzzle of the game, how to turn on the computers in the Flat in Stray