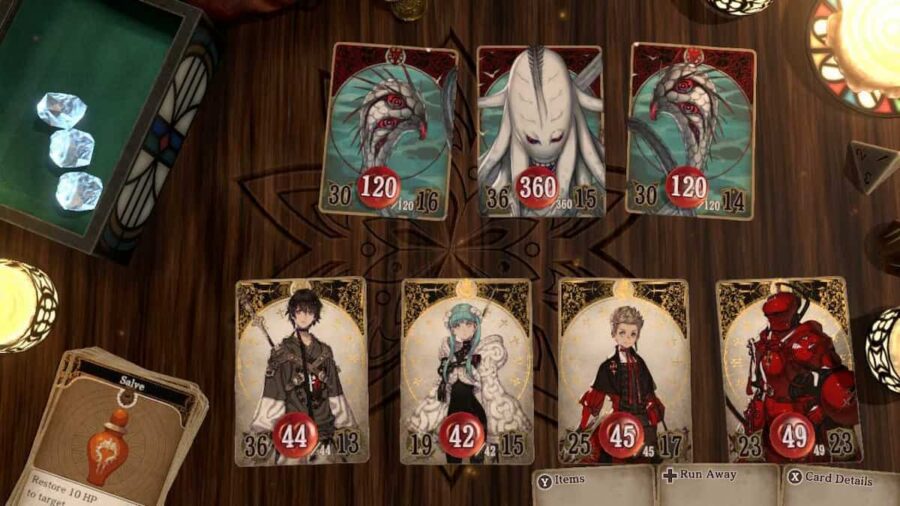 After the brutal battle with the Giant Shadow in the Heart’s Dominion, you find out the world at large is facing its own troubles. Without the protection of a spirit, Omega Isle has become the Isle Eater’s first meal in decades. Together with L’via and Gladio, you agree to defeat it.

However, the Isle Eater is no joke. Not only does its main body have 360 HP and 36 Attack, but it has a left and right tentacle with 3/4 its strength and an HP of 120. All three parts are immune to status conditions like Paralysis.

If you’re having trouble defeating the monster of legends, here’s a quick guide.

Kills the arms first. Both arms have the capacity to buff their Attack (+10). You can’t afford to keep them on the field, especially with only one (single-target) healer in your team. Ignore the main body for now.

Related: How to win the open tournament in Voice of Cards: The Forsaken Maiden

Next, while you may not have a healer, you do have Gladio. Gladio is a high-DEF, high-HP character with a Provoke skill. Let Gladio take all the hits. Heal him with Laty if you need to. The protagonist and L’via will handle your offense. L’via’s Bisecting Blade, in particular, is an amazing move that inflicts Attack+20 damage when it lands. If it hits, it deals at least 40 damage and 60+ on critical. There’s just one catch: it only has a 60 percent chance of landing. Still, it’s good odds, and we highly recommend you bet on it.

In this fight, there will sometimes be Happenstance turns where all dice rolls will land on a six. Use Bisecting Blade on them.

Once you’ve defeated the arms, you can now focus your efforts on the main body. Hasten your efforts by using Gladio’s Defense debuff skill. There’s a 30% chance that it might not land, but that’s okay. Try again next turn.

Note: The next section contains minor spoilers for the last chapter.

How to beat the Isle Eater beneath The Dread Sea

Once you’ve finished the game, you now have the option to rechallenge the Isle Eater at The Dread Sea. Just reload your save and exit Heart's Domain. This is the area initially surrounded by whirlpools near Omega Isle. This Isle Eater is no pushover, and seeing those near-50 attack is enough to make anyone doubt their readiness.

The biggest tip we can give you for this fight is to take the Azure maiden and attendant with you. Half of the Isle Eater’s attacks are water attributed, which Phila is resistant to. Then, you have Hyd’s Assault skill, which lowers the enemy’s attack by around ten.

Next, never attempt to outspeed this enemy since the left card is extremely fast. Instead, build your protagonist to tank. Give him Emperor’s Glory if you have it. However, Laty’s speed needs to be at 16-18 so she outspeeds the right side. You don’t want two back-to-back attacks inflicted on your party without Laty's heals in between.

Lastly, don’t forget to stock on Omnipanaceas. You can purchase them from the Omega Village duplicate inside Heart’s Domain. It’s the floor before the last one in the Spire. Make sure you have a ton of Quality Omnisalves and Supreme Salves as well. These can be bought in Alabaster City.

With your preparations complete, below is the battle flow you want to practice:

Once one side is dead, you can rest easy! There’s no way the other side alone can beat you. Just remember to keep your HP up. Never rush the battle.

How to beat the Isle Eater in Voice of Cards: The Forsaken Maiden